I got to realize that when it comes to rabbits (and most other animals), two is almost always better than one. And bonding is often successful with a time and patience. 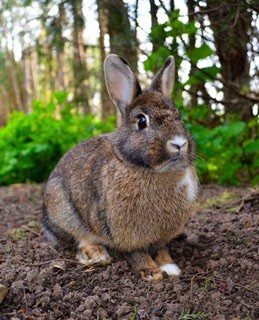 In the wake of Oliver’s passing, I noticed Delilah was spending most of her days under my bed. She seemed kind of sad and had started pursuing the cats for attention. Unfortunately, the cats are borderline afraid of her. The reason is unknown as she is not mean to them, she she just wants to play!

After several weeks of consideration, I spotted a female Havana on my local humane shelter website. I checked the page each day for almost 2 weeks. Seeing she was still there one Friday, I decided to go meet her. Right away I could tell she was a very docile, relaxed bun. She doesn’t mind being held and enjoys pets. She was found outside covered in ticks and had wounds on her neck and ears. Fortunately, she was as good as new when I met her.

I took her home to carefully introduce her to Delilah.

I have never bonded two females before, but I’ve heard it is often a greater challenge than bonding a male and female - Oliver and Delilah bonded right away!

Keep in mind that attempting to bond two rabbits should only be done when both rabbits are spayed/neutered! The vet had spayed this little girl, and they had spayed Delilah a few years ago when I got her from the same shelter. They should also be bonded in a neutral territory where the space doesn’t smell like either bun.

I set up a pen, litter box, blanket, food and water in a separate room that the new bun could have to herself as she adjusted to her new surroundings. I didn’t name her the whole first weekend I had her because I wanted to make sure this was going to work. It was going to break my heart if I had to take her back to the shelter, but I wanted to make sure I was doing the right thing for both her and Delilah. They both deserve a happy home life without strife.

For their first bonding experience, I put Delilah in the (empty) bath tub and then I sat in the tub where I held the new bun in my lap. Both sniffed each other and Delilah took a couple tufts of hair out of the new bun (not hurting her or drawing blood). Pulling fur out is normal when buns first meet - as long as it doesn’t escalate into full-blow chasing or fighting. Fortunately, I was there to referee. This first meeting lasted about 10 minutes.

The second meeting in the tub, I stayed out and allowed them both to be in there together as a closely watched. Because it’s slippery for them, they move cautiously. Delilah attempted to chase the new bun again, and the new bun submitted to her by putting her head down. This was a good sign that she was submitting to Delilah - who is not normally an aggressive rabbit. This meeting lasted about 15 minutes. I also would allow Delilah in to the room I was keeping the new bun in for 5 minutes at a time so that she could start to get acquainted with her scent.

Now I felt that it was time for the buns to be more regularly exposed to one another. The ultimate goal was to litter box train the new bun and make sure both buns bonded so that they could free roam the house together. I moved the new bun’s pen into Delilah’s room. Delilah basically stalked the new bun by laying right next to the pen and would ‘attack’ the new bun if she came close. She would not bite through the bars but would ‘box’ the new bun with her front feet if she got too close to the bars. To make the new bun feel safe, I put a blanket over half the pen to give her some privacy, but Delilah would just go behind the blanket and stare at the new bun. She was definitely curious about this interloper. After a couple days, I noticed they would lay side by side with the pen separating them.

It was time to give them more ‘face-to-face’ time; I opened the pen and allowed the new bun too explore the bunny room. The first few times I did this over the next 2-3 days, Delilah would try to chase her out of ‘her’ space. But Delilah also seemed to like having access to the new bun’s pen and litter box - she was able to familiarize herself with the new rabbit’s scent. By the third day, the chasing had stopped, and I had even put them both out of in the catio since the weather was so nice (I sat in there with them). The catio was very helpful in the bonding process since it was neutral territory. They eventually started cuddling on their blanket in the catio and in the bunny room as well.

Since I was satisfied that they were successfully bonded, I felt that I could finally name the new bun. Her name is Dinah. Dinah loves to explore and is very sweet. She loves to eat and definitely acts like a younger, more energetic bun - I had almost forgotten what having a really young bun was like! Dinah is 1-2 years old. So the moral of the story is that when it comes to rabbits (and most other animals), two is almost always better than one. And bonding is often successful with a time and patience.