fresh start for a vicar and her daughter proves to be anything but. 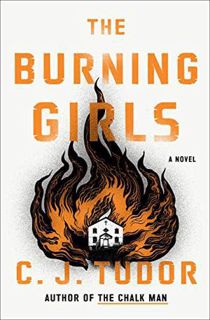 vicar Jack Brooks’ boss asks her to leave St. Anne’s in Nottingham for a more rural placement in the small Sussex village of Chapel Croft, it’s more an order than a favor. She’ll serve as interim vicar until a suitable replacement for the former vicar can be found. Jack’s 15-year-old daughter, Flo, isn’t thrilled to leave the city, but she knows that her mother could use some distance from a horrific tragedy at St. Anne’s that Jack feels largely responsible for. Soon after they arrive at Chapel Croft, however, they learn that their new village has more than its share of weirdness and tragedy. The vicar that preceded Jack allegedly hung himself in the chapel; Merry and Joy, two teen girls, disappeared without a trace 30 years ago; and the village is known for the Burning Girls, aka the Sussex Martyrs, who were burned at the stake in the 16th century. Additionally, Jack keeps finding strange twig dolls on the church grounds and disturbing accounts of exorcisms in her cottage’s cellar. Meanwhile, Flo glimpses strange figures in the graveyard and befriends Lucas Wrigley, a troubled boy with a shady past. Then there are the bodies that keep turning up while dark secrets emerge about a local (and very powerful) family. The author steadily cranks up the scares and the suspense while smoothly toggling between multiple narratives, including one that indicates Jack’s past may be about to catch up with her. Jack is immensely appealing: She curses and smokes, and her faith, which she explores throughout, is complicated. Luckily, Jack and Flo share a strong bond, one they’ll need in order to face what’s coming, and readers will savor the final, breathless twists.