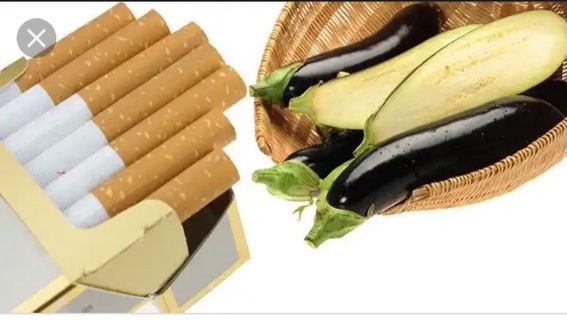 Eggplant seeds, which are the tiny, grainy pieces inside the flesh of typical eggplants, are unavoidable when eating the vegetable. They add texture and flavor, and they are embedded in almost every bite. But the insides of their seeds contain trace amounts of nicotine the substance primarily responsible for the addictive properties of cigarettes.

Nicotine is a stimulant, and it causes a rush of adrenaline upon consumption. Alongside this rush, it spurs a release of dopamine, our body’s “happy hormone,” and a corresponding feeling of elation. The combination feels exhilarating to cigarette smokers and is in part the reason they have such a hard time when it’s time to quit. Withdrawal from the high often induces shaky hands, sweating, irritability, and a rapid heart rate, alongside some intense psychological cravings.

The seeds provide a drug concentration of 100 nanograms of nicotine per gram of eggplant. So if you eat a delicious serving of eggplant caponata, will you experience this painful withdrawal until you satisfy your fix for more? No. Not unless you ate a whole ton of eggplant seeds.

According to a 1993 study, 10 grams of eggplant, which is equivalent to a little over a half a tablespoon, has roughly the same amount of nicotine you’d ingest from three hours of secondhand smoke. That’s not a lot the dangers of secondhand smoke largely come from the burning tar and other chemicals, which release carcinogens. You can’t get addicted to cigarettes from smelling them.

Additionally, the study revealed that you would need to consume over twenty pounds of eggplant to experience the nicotine effect of just one cigarette. After consuming that many vegetables, you’d first be rushed to the hospital with digestive complications from ingesting too much fiber a nutrient of which, by the way, eggplant is an excellent source..