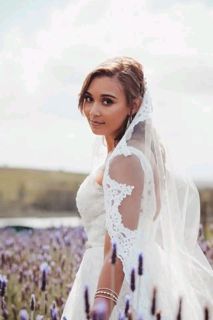 Gerald stood at the gate, feeling funny in his gate man uniform.

Just three days ago, the six selected girls for the competition had started preparing and today, they were all coming over at the great mansion of Bikroft family.

One of the wealthiest family in the whole wide world.

Gerald’s actually the second son of the family and had just returned from England where he went to school.

Their father is late and everything has been transferred unto him and his elder brother, Arnold.

They are both handsome, dashingly handsome and great.

Gerald is almost thirty while his elder brother is Thirty two.

He paid his Aunt who is their late father’s sister to act as the coordinator.

Gerald stood at the gate, breathing and breathing out.

He was restless because he doesn’t know what to expect.

He was still contemplating on this, when the first girl arrived, dragging her luggage with her.

She knocked at the gate looking so beautiful.

Gerald quickly opened the door for her and she came in, smiling seductively and looking around the big compound.

She has just returned from Canada where she went to spend a nice vacation with her parents.

Cindy is here to do anything to win the heart of the son of the great Bikroft.

“Wow, ma’am. You look sexy.” Gerald greeted. Cindy turned to look at him.

"Are you talking to me? ” She asked, staring up and down at him. Gerald nodded.

Cindy stared up and down at him, hissed and catwalked further into the compound. She turned sharply.

“Where the heck is the way here, running mouth?” She fired at him.

Gerald quickly pointed to the right building and watched her go as she swayed her hips.

“Wow. This is beautiful.” Gerald laughed to himself.

Not quite long, the second girl arrived. Gerald almost choked. He almost wanted to ask her if she lost her way.

“Oga (sir)open this gate na. Wey you dey there dey look like mugu. (Why are you standing there looking like a fool?)

You are not going to open! ” The girl shouted, kicking the gate.

She was wearing khaki shorts and big sandals.

Her top was lemon whereas her khaki shorts are orange. “Is this where you are coming to?” Gerald had to ask. She is not looking only funny, she looked so dramatic.

“is this not Bikroft mansion ? Is it not their estate? this! ” She shouted.

Gerald quickly opened the gate and she rushed in like waterfall.

Her name is Maria. Aged twenty three. Her parents are rich and famous but she’s just being herself. Funny and local.

Maria sauntered into the compound, laughing and admiring the building. Gerald’s mouth was hanging open as he showed her the way.

He burst out laughing. Incredible.

Minutes later, the third girl arrived. This one was looking like a princess with her puppy hanging on her left shoulder.

Her ring Bob hair in red matched everything she was wearing.

This one looks adorable but unfortunately for Gerald, she was actually a spoilt brat.

“Carry my bag inside. Oh! I’ve been walking from up there with many things to carry. Hurry up! Lettuce doesn’t like sunshine! ” She said, referring to her puppy.

"You say? ” Gerald asked again, making sure she heard her tell him to carry her bag.

“Hurry up! Take my bag inside!” She said in a totally different accent. She must have grown up in the states. Gerald thought and wondered where her aunt picked the girls from.

Gerald had to swallow the in,sult as he pulled the bag inside. She smiled and came in, rubbing her palms on her puppy’s fur.

Her name is Valerie. The only daughter of Mr and Mrs Benjamin, one of the share holders at Bikroft enterprises. She’s twenty two and very pretty.

She also grew up in the states and had come back few days ago for this great competition.

Gerald showed her the way and watched her walk away.

The fourth girl arrived, looking so hot and se,xy. Gerald immediately ha*ted her. She was actually half na,ked. Is she in the right state of her mind? What guy is gonna marry this?

Gerald opened the gate for her and watch her come in.

She actually smiled se,ductively at him, showing off her chewing gum.

“You are the gate man here?* Uh uh! You are looking good!” She said and laughed.

Very cunning and full of determination. She’s gonna do anything to win! Becky isn’t here to compete!, She’s here to win!

The last girl arrived. Gerald blinked and blinked again when she knocked so an,grily at the gate. She actually had tears in her eyes.

“Won’t you open the goddamn gate, you dummy!” She ye,lled at him. She pulled her luggage to her side and stood staring a,ngrily at him.

Gerald knew she was the last girl and here was the most beautiful out of them all.

She looked very slim with cu,rvy hips and breasts that needed no f-----g bra.

Stop it, Gerald! That isn’t what you look on a woman. It’s not about being beautiful. This is about character! Gerald chilled himself before opening the gate.

Her name is Natasha. Aged twenty three.She’s an only child of a single mother, Mrs Asade who owns one of the largest supermarket in town.

She’s also very famous and influential and this had made her daughter worthy of this super competition.

She looked like a queen even despite the tears in her eyes.

“What the h,ell are you staring at!” Natasha y,elled at him

"I’m sorry for staring at you but you were cr,ying.” Gerald said and made the biggest mistake of his life.

He reached out his hand to clean her face only to be greeted with a thunderous so,ap.

The girl just slapped him. She just did!!