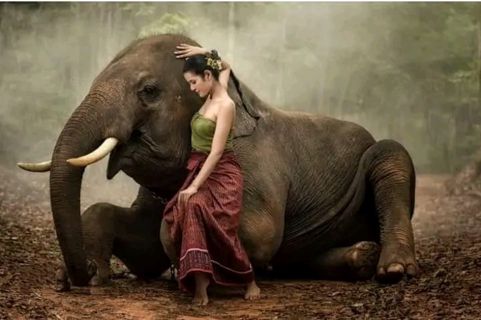 I am a married man with five children. I cannot say I am a widower. My wife didn’t die, neither has she died. She didn’t run away. What happened to her is still a mystery. A mystery I brought on myself because of my insatiable thirst for beautiful and fair-skinned women.

I was a hunter. My father was a hunter too and so was my grandfather. Hunting has run in our family for generations and now it was my turn. For a not so educated man like me who lived in the village, I found no other profitable job to do. Hence, I had to follow in the footsteps of my ancestors.

I am an old man now, almost seventy years. However, in my heydays, I was a tall and handsome young man. I was also strong and intelligent. My unique physical and psychological features made me the dream man of every village girl. However, it was like some strange village god was directing my life. In spite of all the attention I got from many a village maiden, I had no interest in any of them. I was still in my prime and felt there was no need to hurry. I concentrated on my hunting business and put all my energy into it.

I was not just an ordinary hunter. I was an elephant hunter. It was a risky business, very risky. Firstly, I stood the risk of running into trouble with the law, since ivory was illegal in most parts of the country. Secondly, I didn’t use a normal hunting gun like most other hunters did. I had been able to procure a military-grade weapon; AK 47 to be precise. Thus, I was able to kill elephants without any difficulty. I sold the tusks in the black market and the meat to the village people.

There were lots and lots of risks involved in hunting elephants. Their colossal size was one of these risks. In a case where your gun got jammed, and the elephants decided to chase you, you would be in serious trouble. There was an incident I was once involved in. I was in the forest, hunting. Suddenly, I was confronted by a group of elephants. There were about twenty of them. As strange as it may seem, the elephants seemed to recognize I was their foe. They came at me with all prejudice. I was sure I was going to die that day. But, I didn’t. I opened fire at them. Six times, I fanned the hammer and six elephants dropped dead. The rest of them took to their heels.

To be very honest with you, you cannot be an elephant hunter and not have a little bit of black magic. You can call it witchcraft if you like, but it isn’t. Witchcraft is a dark and powerful magic. What I possessed was powerful but I won’t altogether call it black. Afterall, it helped me with my livelihood, my daily bread. So, how could I call it dark?!

The truth is that, some elephants are not mere elephants. Not all of them are ordinary elephants. Some are people’s totems. I am serious when I tell you this. Many years ago, as a young man, I had been confronted with many of such totems. There was one particular incident that is still fresh in my memory. I had made a bet with an old man in the village. He had claimed to have an elephant totem in the village and had promised to deal with me. I warned him and told him I was going to shoot him if I see his elephant. There was no way of distinguishing between an ordinary elephant and a totem. He thought I was joking.

The very next day, I was on my way to the forest to hunt. I had not even gone far into the bush when I saw a massive elephant standing on my way. I pulled out my AK and was about to fire when the elephant’s head suddenly transformed into that of a human. It was the old man who had made a bet with me. He begged me in his human voice to call his challenge a bluff and spare him. I didn’t. I fired two shots and he dropped. Luckily for him, he was close to the village. When I shot him, his human form dropped dead at home. He quickly confessed and his totem was changed and a new one given to him. Thus, his life was saved. Next time, he would be more careful.

I know you are surprised how someone’s totem can be changed. Yes, it’s possible. This world is more mysterious than you could ever fathom. In the underworld, where people have totems, when the totem is killed, the owner automatically has to die. Your totem is like an extension of you. It’s like your soul. It’s like your avatar. Whatever affects it, affects you. However, you have to be bold enough and explain to the top witches and wizards in the village that your totem has been killed. If you do that on time, you will be given a new one and your life saved. If you don’t, you will die. Most people don’t know about this and die ignorantly.

Sometimes, when you are initiated into witchcraft, you are not told immediately. In such a case, you have a totem roaming the bushes but you are not aware. The connection between you and your totem has not yet been established. Thus, if your totem is killed, you die without even seeing it coming. Most of the other older totems are usually selfish. When they are in the bush, in their animal forms, looking for food, the make sure the newer and unintelligent totems stay in front. They use them as a shield just in case a hunter shows up. If a hunter attacks, the ones in front will be killed and the older ones spared. It’s like being put at the war front where the fighting is heaviest. This world is mystery.

Anyway, enough on lectures about witchcraft. Let’s get back to my story. One day, I was in the forest, hunting. It was a bad day. I hadn’t shot anything all day. Not even an ant. I was tired, hungry and thirsty. I decided to go to a river in the middle of the forest to have a drink and quench my thirst. When I got to about twenty meters to the river, I was shocked by what I saw. I saw a group of very beautiful women bathing in the river. They were all stark naked but I couldn’t see where they had kept their clothes.

I wondered in my mind how such beautiful women would be bathing in a river in the middle of an African jungle. The river itself had always scared even me. It was dark, wide and deep. The sound it made as it flowed could be heard from a kilometer away. But the women seemed not to be afraid. They were enjoying their bath, splashing, dancing and playing with each other with merriment. They were all very beautiful in a mysterious kind of way. However, there was one that was particularly striking. I was deeply puzzled and decided that there was more to it that met the ordinary eye. I hid behind some bushes and waited to see what would happen.