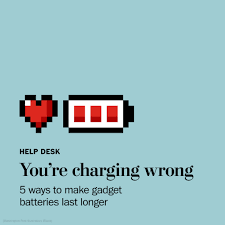 The rechargeable batteries in phones, laptops, headphones, toothbrushes and game consoles will all wear out eventually. But they’ll last longer if you follow these tips.

Give your gadget's battery a little TLC and it will last longer.

Your charging habits may be killing your gadgets.

After a recent column about the hidden death dates built into our devices, many Post readers asked me what we can do to prolong the lives of products with rechargeable batteries.

“I have an Apple phone which I usually charge once a day, when it reaches 50 percent battery or less,” emailed Marian Levine of Silver Spring, Md. “Will it extend the life of the battery if I wait until the battery is lower?”

It’s a murky aspect of gadget ownership: Lithium batteries are finicky. They all gradually lose capacity, meaning it's only a matter of time before your device just doesn’t carry enough juice to be useful. But how much time? Some of this is baked into the design — but the ways we charge and use batteries can also make a difference.

For example, leaving your device plugged most of the time may help you avoid the stress of being caught with a low battery. But it also might be stressing your battery.

So what can we do to make batteries live longer? I called up two scientists who study lithium batteries, the University of Michigan’s Gregory A. Keoleian and the University of Maryland’s Michael G. Pecht. “The key drivers that influence degradation are the temperature, the state of charge and the charge rate,” says Keoleian.

They advised us to always follow the specific advice of manufacturers. (For the record, here’s what Apple and Samsung say.)

But the scientists also shared some useful general tips about how charging habits can help our batteries have long, happy lives.

1) Don’t charge until you’re down to 20 percent

To squeeze the most life out of your lithium battery, your goal is to slow the speed at which you burn through so-called charge cycles. All devices are designed and manufactured with a target number of times the battery can be completely discharged and recharged. It’s typically between 300 and 1,000.

So here’s a handy rule: Don’t start charging until your battery reaches about 20 percent — and try to stop when you get to about 80 percent. This will make sure you maximize each cycle while keeping the battery free of stress. (Keep reading for details on how some smart devices such as iPhones manage this for you.)

Is your battery swelling up like a balloon? Here's why.

“It is better to charge just before you are going to use it — that’s the ideal,” says Keoleian.

It’s also true that the slower you charge, the less damage you do to the battery. These days, some products are sold with “fast” charging capabilities when you use special bricks or car charging stations. Fast is obviously great when you’re in a hurry, but Pecht says that you should avoid it when you don’t need it.

Many of us charge devices overnight while we sleep, which is fine. But then we also plug them in for the drive to work or at a desk all day long. “Avoid keeping things plugged in 24/7,” says Keoleian, because that can cause your battery’s capacity to fade.

The reverse is also true: Being completely empty is stressful on your battery, so avoid running your battery down to zero if you can.

And forget a myth that says you need to occasionally fully discharge and recharge to erase battery “memory.” That applies to lead-acid batteries, but not the lithium ones most mobile gadgets use today.

Pecht recommends storing devices you don’t plan to use for a while, such as an electric drill, at about 50 percent charge. This means it’s also not a good idea to leave things in their chargers when you’re not going to use them for a while. (We’ll get to laptops in docking stations below.)

Like most of us, our batteries are happiest at 72 degrees or cooler. And it’s particularly bad for the battery chemistry to be exposed to heat above 90 degrees, such as in a car on a sweltering summer day. “Remember, when a battery is enclosed in a case, it can get even hotter,” says Pecht.

Cooler temperatures (above freezing) are not as bad, though some manufacturers advise against recharging in the extreme cold. Pecht says he stores unused batteries in the fridge — just make sure they’re not exposed to moisture that could corrode the electronics that surround the battery.

A bit of good news: Over the past decade, products including high-end smartphones and laptops have gotten much smarter about charging and automatically prevent some of the mistakes above.

Many laptops, which can sit in docking stations for weeks at a time, now know to stop charging and keep the battery below 100 percent — though Keoleian says it’s still a good idea to unplug it every once in a while.

Apple iPhones running iOS 13 or later have a nifty feature called Optimized Battery Charging that can track your typical routine and automatically time the charging to make sure it’s full right before you wake up and need to start using it.

When your device’s battery is finally kaput, you don’t necessarily have to get rid of it. Ask the manufacturer if there’s a way to replace the battery — or even look to see if you can do it yourself with the help of a repair website such as iFixit.

Getting another few years out of an existing gadget will save you cash, and it is also much better for the environment.