Chapter Two: Thinking About The Missing Family Members. Come back everyday for a new chapter.

This is the story about identical twin sisters, Lorella and Norella but not the same. Their fate relies on their family and their family's fate relies on them. Will they ever become that sweet family they used to be after they discovered father what their father had done in the past? It happened many years before they were born. Why not read to find out. 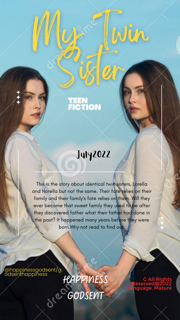 She jumped off the school bus the school bus and waved her friends goodbye, she was not happy when she saw her house. She just don't know why, she looked around but saw no one as she walked into her compound, she then remembered last night. Oh! Her parents had a fight. She now know why her mother was not happy, but she thought it was her sister....... But now she knows.... It was all because of her father, damn it.

She don't know what happened barely cared to know because she thought it wasn't serious, but why? It concerns her. "Oh Lorella" She almost screamed out.....But now it's too late, when she came out of her room she saw her father leaving with her

twin sister behind him with her backpack and some of her father's belongings....But she never cared to know, to understand all because of that upcoming bullshit competition she was preparing for. That damned thing she called her science textbook, only if she had known, if she could just turn back the hand of time,to make things right. She would have come out and pleaded with her father more and drag her sister to her room. "Oh no" tears gathered around her eyes until a year rolled down her cheek.

Her puppy barked at her before she returned to reality, she have been standing close to the gate for thirty two minutes, she squatted then the animal walked up to her and began to lick her face, it licked her tears that is now pouring down like that rain this morning. "Luna, how are you?" she said as she forced a smile on her face, the animal waved it's tail at her and tickled her, then she laughed softly.

Thirty minutes later, she was finished with all her chores when she decided to watch tv, but her tummy bites her ...... She is hungry..... She haven't had breakfast and it's four twelve PM, dammit. "Oh"

She rushed to the kitchen to check out for anything to eat even water, she is damned thirsty "Oh God!" She checked all the pot but no food in any, not even one..... None to eat..... Not even a bite.

But she found a note from her mother on top the dining table which tells her she prepared some spaghetti with cheese, hamburgers,artichokes with hollandaise sauce and sandwich prepared with cream cheese and ham with fresh watercress and paper thin slices of tomatoes. Her dear mother knows these are her favorites and she is going to eat each of them, even if it's a bite each, her mother was a Godsent from heaven because between man and God, heaven and earth should know that, but they were all locked up in the cabinet, the note tells her to go up to her mother's room to get them.

She sat there alone, an hour and thirty minutes eating all alone in the world, she felt abandoned and forgotten, but not regretting it because she is taking both brunch and dinner together, she is eating once for the whole day, she is not going to eat twice..... just once..... But her sister,poor Norella with her poor father. Once again, she is remembering last night, she can recall her mother calling her father names..... No .... Dammit... . The past is in the past, she still don't care, everyone with their own burden, all she is interested now in is winning the coming competition scholarship. She's already the winner, she just smiled to herself.

Now it's five thirty PM, she is all alone in the house abandoned by the world, she have to go out, she had to. But she don't even know where to go, to meet her father and sister,no, she don't even know their whereabouts,"Oh God!" To meet her mother at her office? No. Her mother will soon be home, no need. She then decided to go to her room to complete the last chapter, to read it one more time. It just seems everything is falling apart, she now cares only about her book more than her twin sister and father, her family, her friends, the whole world, to hell with all of them for now. She was feeling beaten and tired, she just have to rest. She sat in front of her dressing mirror in her room, she looked at herself, she sat there just looking at her reflection, the second Lorella, she is just like her mother, no her twin sister, whatever.

But all she could see was a fifteen-year-old girl with her blond afro hair tied tightly in a knot, A white African girl, a science student in her last year in high school, a girl whose dream is to become a qualified medical doctor and a singer. A girl whose beauty is beyond humans imagination. A Nigerian-European girl who doesn't give a damn about her culture and traditions, a girl who doesn't care about anyone, not even a damn, but just she, herself and her with her education and future...... That's all that matters, right? Not even her one and only twin sister, oh God! She don't even know her whereabout, but she misses her. " I miss you like hell, Norella am missing you, because looking at this mirror, I can see you smiling back at me. My love, peace be with you wherever you are" she said it loudly but to herself and no one else.

But now she stood there puzzled again, she just turned and jumped in and out of her bed, she then laid on the back and looking up the ceiling counting how many pieces of furniture was used to construct it. But she became absent minded,bit knowing what to think about again, if it should be about herself, her education, her future, her sister, her family, her friends, her puppy, her book or the food she just ate two hours ago.