Summary Of Not Eyes Can It’s about Azan, a blind lady but magical who can only see things people can’t see. She met her misfortune during her visit to Yeri, her close friend. Seeing things isn’t a new thing to Azan,she began seeing extraordinary things at age 4. Her visit to Yeri changed her life completely, she saw a ghost who she cannot but help fulfill her wishes. Along the line, her life is at risk as she was made the queen of afterlife due to her quest of fulfilling the witch wishes. 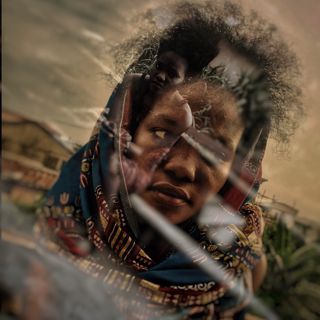 On a quest to find her one and only friend Yeri, Azan decided to take a risk. Being an extraordinary lady, Azan not only see what no one can but also has the sense of smell. Azan can tell a scent of both ghost and humans. Azan decided to give her all to finding her invisible friend through her scent. Dangerous and risky, Azan went ahead with her instinct, letting Yeri’s scent be her guide. It was a wonder as Azan was more healthy and glowing than a well fed lady. Azan, eating nothing in particular, but healthy and strong. She stands on her feet with her both legs on the ground, holding nothing in particular, she walked majestically like a well trained model. The villagers were always amazed by her mystery ways. They call her the mystery blind devil with a cunning way. They turn her home into a shrine of curse because they couldn’t understand how a blind lady with a normal eyes can’t see the things humans can but only see ghost and unfortunate things. They believed she is the daughter of the devil brought by their great ancestors through curse and they forbid anyone from associating with her or chasing her out of the place she stays which they turn into shrine. It was believed that when the time comes, she will leave on her own. It was a great joy for the villagers as they saw her set to leave. She was never that prepared like she was that day, this was all because she was so determined to see her friend Yeri. She cared about no one but her friend alone, who has been the one caring for her when no one does.

The villagers sprinkled salt on the ground, not leaving garlics behind. They all form a circle and danced, believing their curse which is "Azan" is gone. They believed their sins were forgiven. Azan on the other hand was trying to differentiate other scents from Yeri’s scent. It was very frustrating for her but she vow to never give up. It gets to a stage, she couldn’t get hold of her scent anymore and she sat down devastated. She was lost in thought when she felt a great sensation. It was as if something was romancing her left shoulder, she turned in fright with her nose wide like a dog, she couldn’t detect whatever it was, she then asked to be enlightened and stating that she isn’t afraid of no one, even the mighty ghost. These made the sensation master who is romancing her shoulder angry and said; how dare you mere mortal? I am the mighty witch who knows nothing but gifting sadness. I will beseech you with the gift of sadness as you already belittle the mighty me. The witch lifted it’s hands and draw out some memories from Azan, leaving her with nothing but sad memories of her childhood. She then asked Azan what she is doing in her territory. With fright, Azan replied, saying she is here to see a close friend but she doesn’t remember what she is like or the reason she is so close. She only remembers that she doesn’t want to loose her friend. She started crying and she said she doesn’t even remember her friend’s name as everything is fading from her rapidly. She plead to the witch for a way out and the witch told her she can only help her if only she fulfilled her wishes. Azan promised to do whatever the witch ask, if that will bring her lost memory and friend.