It’s about Azan, a blind lady but magical who can only see things people can’t see. She met her misfortune during her visit to Yeri, her close friend. Seeing things isn’t a new thing to Azan,she began seeing extraordinary things at age 4. Her visit to Yeri changed her life completely, she saw a ghost who she cannot but help fulfill her wishes. Along the line, her life is at risk as she was made the queen of afterlife due to her quest of fulfilling the witch wishes. 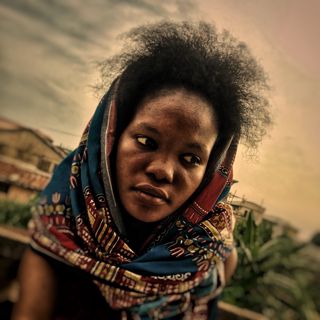 Azan, a twenty-year-old blind lady is known for her extraordinary lifestyle. She was thrown out by her parents at age four when it was discovered that she has the ability to see things that no one can. It was believed that having the ability to see extraordinary things can cause a great misfortune to herself and her parents. The most shocking thing is that, though she was thrown out, no villagers took her in and she was all by herself. All they know is that Azan is always communicating with no one in particular and eating nothing in particular. This is where Yeri, her friend comes in. Yeri has been her friend for sixteen years. The disheartened truth is, Yeri is Azan invisible friend who played and feed her when nobody does. For weeks, Yeri is no where to be found, Azan set to find the whereabouts of Yeri, her invisible friend.