MY JOURNEY AS A CHILD by Richie Kharis 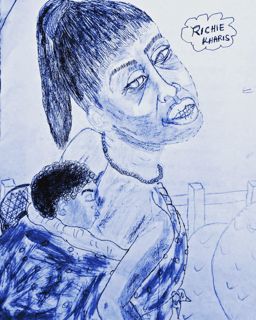 I came into the world with my hands folded.

Yet they welcomed me with laughter and danced the sorrow away for tomorrow.

Soon, I could no longer walk with my four legs,

I became a little star, running around the field with two legs.

because I was born with a golden nail.

And the sun was fun for me no more

I became one of the souls that trekked a thousand miles,

because the rolling box was sold for some cake.

The beauty was too wrinkled and old to hold my hands,

So, I held her instead of the more

I became the breadwinner of the day,

with my head spinning like a clock with no pay.

Then I remembered my little days

When I wouldn’t eat until my toy was bought,

As I watched my old beauty smile at me

She said to me

The journey begins when the tree gives birth to its fruit and leaves it ripe.

Until the shell that covers its seeds is removed

The seed will always be blind.

But when its cover is removed,

It struggles to live or else it dies.

Then I saw the future dancing from afar

With less effort to come nearer

For it was too easy than it is now