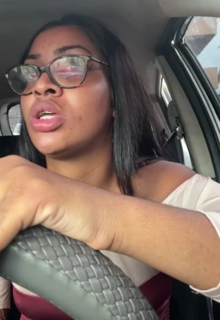 I was on my phone scrolling through YouTube when I saw a video of Dee Official pops up. I suddenly click and watched the whole thing and I had to say it was very upsetting. Her husband hit her in the mouth causing her braces to shift, she also lost a nail and on top of it she later defend him "He got anger issues a long time before we met" she said... So the guy beat her up because she refuse to give him sex and she feels proud because she was cussing out another Influencer by the name of Ivany saying Ivany pussy stink and its because her (Dee Official) pussy good why her husband beat her to get it. This shit is not ok.