An angel on board 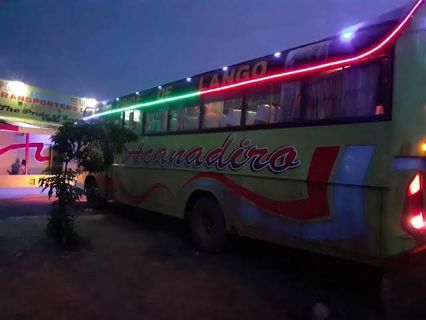 An Angel on board _by Angulo M Abor

Coming all the way from Agali subcounty on a bodaboda, I arrived the mighty Lira bus park with my old dusty suitcase, ready to board a bus to school. I looked up and down, left and right, back and forth but to my dissapointment I could not see my favorite bus. All the buses available at that time were the ones I had never traveled by.

I stressfully bought Rolex for ugx 2000/= from the chapetti vendors and after that I dragged my suitcase to one of the buses, where I bought a ticket and immediately boarded.

As I was seated leaning backwards with my eyes closed and ingesting my salty and delicious Rolex, I heard the sound of a beautiful voice

"Hey! is this seat occupied?" she asked.

I thought the beautiful voice was coming from inside my head. But then I needed to be sure so I opened my right eye immediately with my left eye still closed, and I could never believe what I was seeing.

I needed again to be more sure, so I widely opened both my eyes and I witnessed the same thing.

I tried rubbing my hands around my face many times but it didn't create any difference.

Believe me when I say that if there was a bucket of water on board, I would wash my face just to be certain.

She was dressed in her black pants and a jumper which was covering most of her physical features making it difficult for me to deduce whether she was my type or not. However her beauty was sparking in her definitively chocolate skin color. Her smooth round face and fat cheeks incited her beauty each time she smiled.

I was always very courageous and talkative, but I surprisingly lost words for this gorgeous maiden.

After travelling for many hours in proximity but total silence, we reached Luwero and I could no longer hold my tongue. The bus slowed down and I bought 2 bottles of Rwenzori mineral water from the street hawkers and then I gave one to her as a means to break the silence.

"Thanks you" she uttered with her sweet sexy voice which hit the tiny wires in my body and impaired my thoughts. I had finally broken the silence with just a bottle of water.

I spent the remaining hours of the journey conversing with her. I was mostly interested in knowing her more, but time was also travelling so fast. She wanted me to give her my number so that we kept in touch, but I was just a high school student without a mobile phone.

Finally, after engaging my brain in a serious debate, I came up with a hilarious idea which was to exchange our Facebook usernames😅. she wrote mine down and I also noted her's in my wallet size leather notebook. Immediately, we heard loud bus horns and passengers making noises in the backgrounds, we had arrived Namayiiba bus terminal in Kampala.

I didn't know Kampala very well because I had only travelled there a handful of times and to my surprise, this beautiful maiden also had no idea about the place. As a matter of fact, she asked me to walk her up to Sir Apollo kaggwa road and put her in a taxi to entebbe.

I couldn't afford to disappoint her because she was my new catch and I wanted very much to impress her. And so I had to put my brain to work again.

I told the beautiful damsel that I was headed to another direction and I would not be able to escort her, so I called a bodaboda immediately and instead of asking for direction, I made her to board and I generously paid for her transportation and also gave her an extra Ugx 3000/= which was all part of my pocket money for school.

I arrived at my destination, which was my brother's hostel in banda where I was going to spend a night before proceeding to school. While he was having fun with his friends at the hostel, I shocked him with news of my new girl. I seriously convince him that I had found a girl for myself and he almost believed me until the time I was supposed to show him proof of her existence.

I reflexed my hands majestically to my back pocket and pushed it inside only to realize that my wallet sized leather shorthand notebook was missing......

What do you think happened?