War of independence of Bangladesh 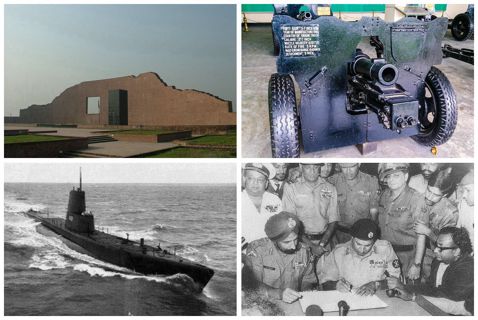 The Bangladesh Liberation War (Bengali: মুক্তিযুদ্ধ, pronounced [mukt̪iɟud̪d̪ʱo]), also known as the Bangladesh War of Independence, or simply the Liberation War in Bangladesh, was a revolution and armed conflict sparked by the rise of the Bengali nationalist and self-determination movement in what was then East Pakistan during the 1971 Bangladesh genocide. It resulted in the independence of Bangladesh. The war began when the Pakistani military junta based in West Pakistan launched Operation Searchlight against the people of East Pakistan on the night of 25 March 1971. It pursued the systematic elimination of nationalist Bengali civilians, students, intelligentsia, religious minorities and armed personnel. The junta annulled the results of the 1970 elections and arrested Prime minister-designate Sheikh Mujibur Rahman. The war ended on 16 December 1971 when the military forces of West Pakistan that were in Bangladesh surrendered.

Rural and urban areas across East Pakistan saw extensive military operations and air strikes to suppress the tide of civil disobedience that formed following the 1970 election stalemate. The Pakistan Army, which had the backing of Islamists, created radical religious militias — the Razakars, Al-Badr and Al-Shams — to assist it during raids on the local populace.[16][17][18][19][20] Urdu-speaking Biharis in Bangladesh (an ethnic minority) were also in support of Pakistani military.[clarification needed] Members of the Pakistani military and supporting militias engaged in mass murder, deportation and genocidal rape. The capital Dhaka was the scene of numerous massacres, including Operation Searchlight and the Dhaka University massacre. An estimated 10 million Bengali refugees fled to neighbouring India, while 30 million were internally displaced.[21] Sectarian violence broke out between Bengalis and Urdu-speaking immigrants. An academic consensus prevails that the atrocities committed by the Pakistani military were a genocide.

The Bangladeshi Declaration of Independence was proclaimed from Chittagong by members of the Mukti Bahini—the national liberation army formed by Bengali military, paramilitary and civilians. The East Bengal Regiment and the East Pakistan Rifles played a crucial role in the resistance. Led by General M. A. G. Osmani and eleven sector commanders, the Bangladesh Forces waged a mass guerrilla war against the Pakistani military. They liberated numerous towns and cities in the initial months of the conflict. The Pakistan Army regained momentum in the monsoon. Bengali guerrillas carried out widespread sabotage, including Operation Jackpot against the Pakistan Navy. The nascent Bangladesh Air Force flew sorties against Pakistani military bases. By November, the Bangladesh forces restricted the Pakistani military to its barracks during the night. They secured control of most parts of the countryside.[22]

The Provisional Government of Bangladesh was formed on 17 April 1971 in Mujibnagar and moved to Calcutta as a government in exile. Bengali members of the Pakistani civil, military and diplomatic corps defected to the Bangladeshi provisional government. Thousands of Bengali families were interned in West Pakistan, from where many escaped to Afghanistan. Bengali cultural activists operated the clandestine Free Bengal Radio Station. The plight of millions of war-ravaged Bengali civilians caused worldwide outrage and alarm. India, which was led by Indira Gandhi, provided substantial diplomatic, economic and military support to Bangladeshi nationalists. British, Indian and American musicians organised the world's first benefit concert in New York City to support the Bangladeshi people. Senator Ted Kennedy in the United States led a congressional campaign for an end to Pakistani military persecution; while U.S. diplomats in East Pakistan strongly dissented with the Nixon administration's close ties to the Pakistani military dictator Yahya Khan.

India joined the war on 3 December 1971, after Pakistan launched preemptive air strikes on North India. The subsequent Indo-Pakistani War witnessed engagements on two war fronts. With air supremacy achieved in the eastern theatre and the rapid advance of the Allied Forces of Mukti Bahini and Indian military, Pakistan surrendered in Dacca on 16 December 1971.

The war changed the geopolitical landscape of South Asia, with the emergence of Bangladesh as the seventh-most populous country in the world. Due to complex regional alliances, the war was a major episode in Cold War tensions involving the United States, the Soviet Union and the People's Republic of China. The majority of member states in the United Nations recognised Bangladesh as a sovereign nation in 1972.

Prior to the Partition of British India, the Lahore Resolution initially envisaged separate Muslim-majority states in the eastern and northwestern zones of British India. A proposal for an independent United Bengal was mooted by Prime Minister Huseyn Shaheed Suhrawardy in 1946, but was opposed by the colonial authorities. The East Pakistan Renaissance Society advocated the creation of a sovereign state in eastern British India. Eventually, political negotiations led, in August 1947, to the official birth of two states, Pakistan and India,[23] giving presumably permanent homes for Muslims and Hindus respectively following the departure of the British. The Dominion of Pakistan comprised two geographically and culturally separate areas to the east and the west with India in between.[24] The western zone was popularly (and for a period, also officially) termed West Pakistan and the eastern zone (modern-day Bangladesh) was initially termed East Bengal and later, East Pakistan. Although the population of the two zones was close to equal, political power was concentrated in West Pakistan and it was widely perceived that East Pakistan was being exploited economically, leading to many grievances. Administration of two discontinuous territories was also seen as a challenge. On 25 March 1971, after an election won by an East Pakistani political party (the Awami League) was ignored by the ruling (West Pakistani) establishment, rising political discontent and cultural nationalism in East Pakistan was met by brutal  and suppressive force from the ruling elite of the West Pakistan establishment, in what came to be termed as Operation Searchlight.  The violent crackdown by the Pakistan Army led to Awami League leader Sheikh Mujibur Rahman declaring East Pakistan's independence as the state of Bangladesh on 26 March 1971. Most Bengalis supported this move although Islamists and Biharis opposed this and sided with the Pakistan Army instead.[30] Pakistani President Agha Muhammad Yahya Khan ordered the Pakistani military to restore the Pakistani government's authority, beginning the civil war. The war led to a substantial number of refugees (estimated at the time to be about 10 million) flooding into the eastern provinces of India.[33] Facing a mounting humanitarian and economic crisis, India started actively aiding and organising the Bangladeshi resistance army known as the Mukti Bahini.

In 1948, Governor-General Muhammad Ali Jinnah declared that "Urdu, and only Urdu" would be the federal language of Pakistan. However, Urdu was historically prevalent only in the north, central, and western region of the subcontinent; whereas in East Bengal, the native language was Bengali, one of the two most easterly branches of the Indo-European languages. The Bengali-speaking people of Pakistan constituted over 56% of the country's population. The government stand was widely viewed as an attempt to suppress the culture of the eastern wing. The people of East Bengal demanded that their language be given federal status alongside Urdu and English. The Language Movement began in 1948, as civil society protested the removal of the Bengali script from currency and stamps, which were in place since the British Raj. The movement reached its climax in 1952, when on 21 February, the police fired on protesting students and civilians, causing several deaths. The day is revered in Bangladesh as the Language Movement Day. Later, in memory of the deaths in 1952, UNESCO declared 21 February as International Mother Language Day in November 1999.