Pharmacist Jin Cruce (54), from Alabama, USA, had spent years deliberating over whether to let her hair go grey, but had always been discouraged. After her first grandchild was born in 2018, Jin felt the need to let people see her true natural 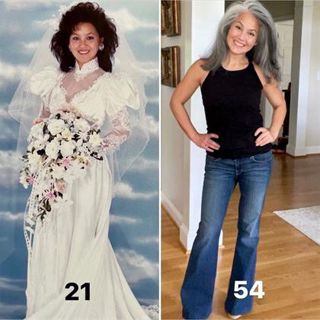 Pharmacist Jin Cruce (54), from Alabama, USA, had spent years deliberating over whether to let her hair go grey, but had always been discouraged. After her first grandchild was born in 2018, Jin felt the need to let people see her true, natural self, and decided to ditch the dye for good.

Her daughter and mother were strongly against the idea – her mother still dyes her own hair at the age of 82 – but Jin was determined. She found a community on of women on Instagram who were empowered by embracing their natural beauty and became inspired. Pharmacist Jin Cruce from Alabama, USA, had spent years deliberating over whether to let her hair go grey, but had always been discouraged, until now. All photos courtesy Mediadrumworld.com/@agingwith_st/Magazine Features

Jin then decided to start the process of growing her dyed hair out. For over a year and a half, she wore her hair tied back to avoid looking at it, before cutting the dyed parts off the second she was able to. With her hair fully grey and able to be styled, Jin soon began posting on Instagram under the name @agingwith_style_and_grays and joined the community she had admired a year earlier, amassing a following of nearly 500 000 followers. Despite receiving negative comments on occasion – including a customer who told her she looked ‘much older’ - she is able to brush the insults off and focus on her supportive community.

She regularly receives messages from other women who have been inspired to embrace their aging and has become involved with a network of women from around the world who celebrate the beauty of getting older – calling themselves the silver sisters. “So when I started the transition, I really didn’t want to deal with my hair. I didn’t want to style it while it was growing out because of the demarcation line – I don’t think I could have handled it. So, what I did was just wear my hair back in a ponytail for about a year and a half. All I saw was the silver around my face, and that was doable for me,” Jin says.

“After that, I ended up getting a haircut and cut off the ends that were dyed. I started growing it out and trying to style it again – getting used to my hair again. Going grey is very hard, it’s not an easy process, so you really have to be strong. I had one older gentleman at work who said, ‘you’ve changed, you’ve gotten older.’ People say that I would look a lot younger if I coloured my hair - my response to them is that I know I don't look younger, but I'm happy with who I am.” “I wish I’d saved all the messages I’ve been sent – I had ladies in China message me saying that all their friends were going grey because of me. I’m connected with so many women all over the country and all over the world," Jin says.

"That wasn’t like me before – now I want to connect with people and learn. It’s really opened me up to different perspectives. I’m more confident and I’m stronger. It made me really open my eyes and see what’s out there.” Do you have gray hair? Send us a photo here.