It's a black people in Nigeria 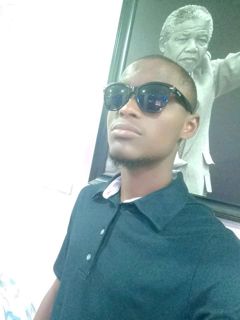 The original people and founders of the Benin Kingdom, the Edo people, were initially ruled by the Ogiso (Kings of the Sky) who called their land Igodomigodo. The first Ogiso (Ogiso Igodo), wielded much influence and gained popularity as a good ruler. He died after a long reign and was succeeded by Ere, his eldest son.

Nearly 36 known Ogiso are accounted for as rulers of this initial incarnation of the state. In the 12th century, a great palace intrigue erupted and crown prince Ekaladerhan, the only son of the last Ogiso, was sentenced to death as a result of the first queen (who was barren) deliberately changing an oracle's message to the Ogiso. In carrying out the royal order that he be killed, the palace messengers had mercy and set the prince free at Ughoton near Benin. When his father the Ogiso died, the Ogiso dynasty officially ended. The people and royal kingmakers preferred their late king's son as the next to rule.

The exiled Prince Ekaladerhan had by this time changed his name to Izoduwa (meaning 'I have chosen the path of prosperity') and found his way to Ile-Ife. It was during this period of confusion in Benin that the elders, led by Chief Oliha, mounted a search for the banished Prince Ekaladerhan - whom the Ife people now called Oduduwa. Oduduwa, who could not return due to his advanced age, granted them Oranmiyan, his son, to rule over them. Oranmiyan was resisted by Ogiamien Irebor, one of the palace chiefs, and took up his abode in the palace built for him at Usama by the elders (now a coronation shrine). Soon after his arrival, he married a beautiful lady, Erinmwinde, daughter of Ogie-Egor, the ninth Enogie of Egor, by whom he had a son.

After residing there for some years he called a meeting of the people and renounced his office, remarking in vexation. This was out of frustration as he often expressed that "only a child born, trained and educated in the arts and mysteries of the land could reign over the people". He arranged for his son born to him by Erinmwinde, Eweka, to be made king in his place, and returned to Ife thereafter.

son the new king was soon found to be deaf and dumb, and so the elders appealed to Oranmiyan. He gave them charmed seeds known as "omo yo" to play with, saying that to do so will make him talk. The little Eweka played with the seeds with his peers at Egor, his mother's hometown. While playing with the seeds, he announced "Owmika" as his royal name. Thus, he gave rise to the tradition of the subsequent Obas of Benin spending seven days and nights at Usama before proceeding to announce their royal names at Egor.

Eweka thus started a dynasty that now bears his name. Oranmiyan went on to serve as the founder of the Oyo Empire, where he ruled as the first Alaafin of Oyo. His descendants now rule in Ile Ife, Oyo and Benin.

Note: Benin had been known as Ubini since the Ogiso period, Ubini means land of heavenly peasantry in Edo language, the Urhobo the Benin siblings had always called Benin Ubini right from when they left Benin City, Its was the Ijaw that told the Purtuguess in the 15 / 16 century of the great King of Ubini which the Portuguese misprounouce "Bini" in their book, just as the Yoruba misprounouce Ubini to Ibinu, same way they misprounouce Edo to Ado also to all the Edo names in lagos like Idumota, Idumagbo all misprounouce etc.

There has been an age long debate between the Benin and Yoruba monarchs who is head, history perfectly explains that, Historians ascertain that the Benin kingdom was founded in 1180 while the Oyo empire was founded 1300s, this perfectly clears that debate. The Benin's are not from Yoruba nor the Yoruba's from Benin but the Yoruba monarch carries the bloodline of the Benin ancestry, same in the north for instance the Emir of Sokoto Sultan Muhammadu Sa'ad Abubakar is fulani in the midst of Hausa Majority his ancestors weren't from there, the Emir of Kano is a fulani in the midst of Hausas.

In the olden days Kingdoms Conquer kingdoms and the most powerful installed rulership. Oduduwa by the Yorubas was said to have come from the east, with many siting Saudi Arabia (Mecca) some Bhagdad, some Isreal, and recently Egypt. But all this countries are north to Nigeria and the whole of west Africa, since the exact eastern location is not certain or rather the actual eastern location is not accepted.

Benin is directly east to Oyo without dispute or much compass work.

Why would a Prince of Saudi Arabia leave his glorious kingdom passes through the hot Sahara desert through the dense forests of western Africa coming in to deep in the jungle to the western part of Nigeria to establish a kingdom for himself with an invitation or envoy. Truth being told the Yorubas reject Benin kingship because is a minority group not as large as they, but that doesn't change history over night even the British knew how powerful the Ancient Benin kingdom was, how dominate and elegant Portuguese and Dutch explorers spoke of the Africa city with walls around it (The great walls of Benin, largest earthwork in the world) and a king sitting on a throne. The Oba palace is a UNESCO world heritage site.

In the 1440s Benin dominated trade along the entire coastline from the Western Niger Delta, through Lagos to the kingdom of Great Accra (modern-day Ghana) It was for this reason that this coastline was named the Bight of Benin. The present-day Republic of Benin, formerly Dahomey, decided to choose the name of this bight as the name of its country.

Deaguma kingdom in Rivers State has since declared their ancestry to the Benin kingdom.

Olu Atuwatse (Dom Domingo) Son of Crown Prince Ginuwa and grand Son of Oba Olua who was sent to Portugal in 1601 for advanced studies by his Grandfather, the reigning Oba. He graduated from the University of Coimbra in 1611. He is the first person to obtain a European university degree in present day Nigeria. He later married the daughter of a Portuguese noble, Dona Feirs. Their son Antonio Domingo referred to in Benin History as the Golden Skinned king, succeeded him to the throne in 1643.

The first Known Embassy Established in Nigeria was in Benin during the reign of Oba Esigie in the 16th century.

The Oldest known letter written in Nigeria was by Duarte Pires instructed by Oba Esigie which was addressed to King John II, on the 20th October, 1516AD. The second oldest letter was written by Anthonio Domingo (Great-grand Son of Oba Olua) to the Pope to seek for missionary assistance in other to spread Christianity in Benin Empire in 1652AD.

The First Storey Building in Nigeria was built at Ughoton by the Dutch in the year 1718, and it was called “The Factory”. The said building was destroyed by the British during the war against the Benins in 1897. The site of the building is still intact.

The Oldest Church in West-Africa was established in Great Benin Empire by the Earliest Portuguese missionaries in the 16th Century which is today known as the Holy Aruosa (Benin National Church). Pope Pius XII visited Benin and handed the church to the Oba of Benin, Oba Oreoghene in 1692AD

Short lesson, Oduduwa or rather Izoduwa was destined to rule no matter how much men tried to change his fate, destiny prevailed.

Oduduwa never came from the sky with chains as being said by the Yoruba of today for it was not possible for someone to come from the sky in 11/12 century when some nation in Europe was already having under ground train. Its no doubt Oduduwa was a Benin man as his name Oodua is Benin.