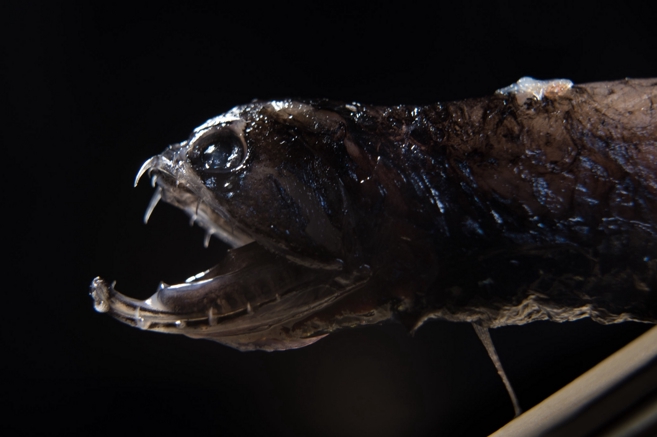 Deep beneath the sea off the coast of California, there is a species of eel-like fish with a huge head, bulging eyes and a mouth full of transparent, fang-like teeth.

Aristostomias scintillans is a 15-cm (5.9 inch)-long deep sea dragonfish found off the west coast of North America. Despite their small size, these creatures are apex predators in their part of the ocean. They are also known to partake in cannibalism.

Their transparent teeth are an adaptation unique to the species—so researchers at San Diego's Scripps Institution of Oceanography were hoping to understand how and why this feature evolved. To do this, the team—made up of oceanographers and material scientists—analyzed the properties of the teeth. Findings were published in the journal Matter.

"Most deep-sea fauna have unique adaptations, but the fact that dragonfish have transparent teeth puzzled us, since the trait is usually found in larger species," senior author Marc Meyers said in a statement.

The researchers looked at the nanostructure of the dragonfish teeth using a specialist microscope. and found the transparency came from nanocrystals embedded throughout the dragonfish teeth. The crystals were found to prevent any light in the environment from reflecting or scattering.

They also found the mechanical properties of the enamel-like layer was comparable to the teeth of great white sharks and piranhas. "However, the dentin, comparatively, is much harder and stiffer with a higher degree of mineralization and a lack of tubules, which is a mechanical trade-off to ensure transparency by reducing scattering," the scientists wrote.

The translucency, researchers say, makes the species a more effective predator—effectively providing them with a "deadly invisible weapon" in the blackness of the deep ocean.

"The transparent dragonfish teeth enable predatory success as it makes its wide-open mouth armed with saber-like teeth effectively disappear, showing no contrast to the surrounding blackness of the fish nor the background darkness of the deep sea," the researchers conclude.

Meyers added: "Down at great depths there's almost no light, and the little light there is comes from fish, such as the dragonfish, that have small photophores that generate light, attracting prey. But the dragonfish's teeth are huge in proportion to its mouth—it's like a monster from the movie Alien—and if those teeth should become visible, prey will immediately shy away. But we speculate that the teeth are transparent because it helps the predator."

The deep sea dragonfish and its transparent teeth.AUDREY VELASCO