The game of destine 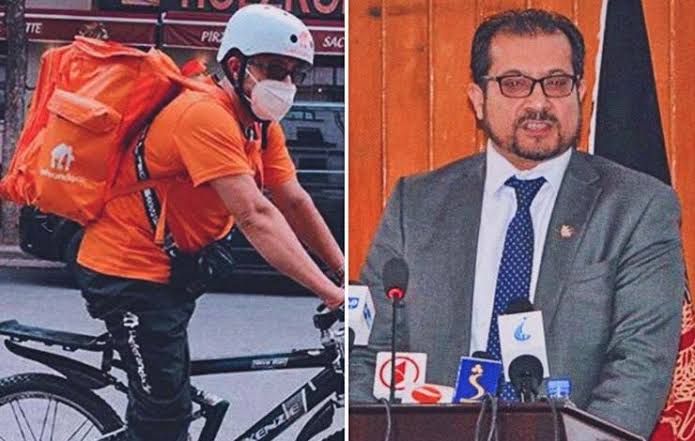 The game of destine

A delivery man from Germany The name is Syed Sadat, who is now a German delivery man, although a few days ago he was a minister in Afghanistan, he is now the Sabine communications minister in Afghanistan. Destiny is back and now he is the deliveryman. However, he is working to deliver goods door-to-door in Germany, thousands of miles away from an unknown country, Afghanistan. On the streets of Germany, wearing a blue T-shirt, a delivery bag, a white helmet and blue jeans and sneakers, he rides a bicycle to make a living. But a few days ago in his own country, he used to go to the government office in a car with the national flag. His past identity was taken to Germany. So in words, the past never identifies anyone, identity is the present. Which can be understood by looking at him. This view of the present world sets a shining example. According to international media reports, Syed Sadat emigrated from Afghanistan to Germany in September last year. He now works to deliver goods to Leipzig, the easternmost city in Europe. Many in the country are criticizing him for doing such things in Germany. Because, before leaving the post in 2016, he served in the Ministry of Communications of the Afghan government for two years. For good reason, many of his former colleagues on the issue of 'nationalism' are expressing their displeasure. But now work means work to him. In this world of competition, many identities are lost over time, and many strangers have to adapt to this change. The man who left his own country and adopted another country was also a minister one day. By doing the work of deliveryman, it is understood that no matter how small, hard work and honest work are the key. I have no reason to regret it," Sadat told the international media. I hope other politicians will follow the same path, working with the people rather than running away. Sadat's story will be exemplary for many after Afghanistan fell to the Taliban. In the meantime, those who have left the country with their families or want to leave may take former Afghan Minister Syed Sadat as an inspiration to choose such a job. Although his work is not just Afghan, it has set an example to the rest of the world. Syed Sadat, a British citizen. "Language is the most important thing here," he said. That's why I learn German four hours a day before I start working six hours a day in the afternoon shift. ' Syed Shadat, who has an advanced degree in IT and telecommunications, said, “The first few days of work were exciting and difficult for me. It seems normal now. ' It is a great honor to be a human being by dealing with the situation from being a fugitive. Moreover with this According to the German Federal Office for Migration and Refugees, the number of Afghan asylum seekers has risen by 130 percent since the beginning of the year, just before the announcement of the withdrawal of US troops. So many like Syed Sadat have to compromise with destiny to find a good job in Germany despite having a past like a ministry. He is now a shining example as a real man in return for patience and hard work with the morale to face all situations.