Cryptocurrency markets are heating up. 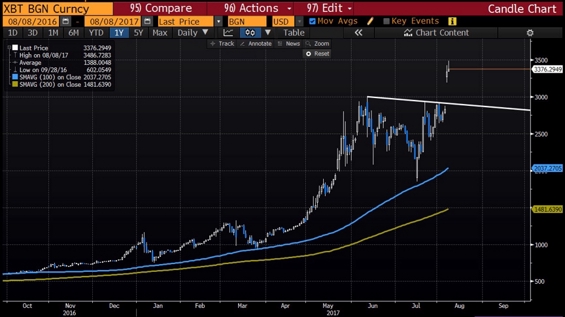 How bitcoin is performing on the market..

Cryptocurrency markets were buoyed by a fresh wave of bullishness Friday, as bitcoin rose for a fourth straight day to a three and a half-month high of over $50,000 and ether (ETH), the native token of the Ethereum blockchain, pushed past a key psychological level of $4,000.

Bitcoin, the largest cryptocurrency by market cap, appeared to get fresh impetus from a report Friday showing lackluster U.S. jobs growth during August. The report fueled speculation that soft economic data might prompt the Federal Reserve to maintain its program of buying $120 billion a month in bonds longer than previously expected.

Some investors speculate that the U.S. central bank’s accommodative monetary policies will suppress returns on traditional market assets like bonds, strengthening the appeal of bitcoin and other fast-rising cryptocurrencies.

Bitcoin climbed to as high as $50,940 on Friday and was changing hands at around $50,700 at press time. That’s the highest price since May, though it is still well off the all-time high of near $65,000 that was reached in April.

Ether, the world’s second-largest cryptocurrency by market cap, rose 4.9% on Friday, pushing past $4,000 for the first time since May. The price climbed as high as $4,025 before slipping back to $3,960 as of press time.

Ether has vastly outperformed bitcoin this year, rising fivefold in price and pushing its market capitalization to about $465 billion. That’s close to half of bitcoin’s market cap of $950 billion.