TBelarus authorities on Monday released video of Mr Protasevich that appears to have been recorded under duress.

He faces charges related to his reporting of last August's disputed election and subsequent crackdown on mass opposition protests, and has said he fears the death penalty after being placed on a terrorism list.

Belarus is the only European country that still executes prisoners.

Belarus plane: What we know and what we don't

Who is Roman Protasevich?

At a meeting in Brussels on Monday, the leaders of the 27 European Union member states called for the overflight ban, and promised further economic sanctions.

On Tuesday, the Belarusian transport ministry released a transcript of a conversation between an air traffic controller in Minsk and a pilot on Sunday's Ryanair flight.

According to the transcript, which has not been independently verified, Belarus suggested several times that the plane should land in Minsk on "our recommendation".

This appeared to contradict earlier statements from the Belarusian authorities that said the decision to land was made independently by the pilot.

What's happening in the air?

At the Brussels summit, EU leaders told the bloc's airlines not to fly over Belarus.

They have also asked member states to suspend operating permits for its national carrier Belavia. 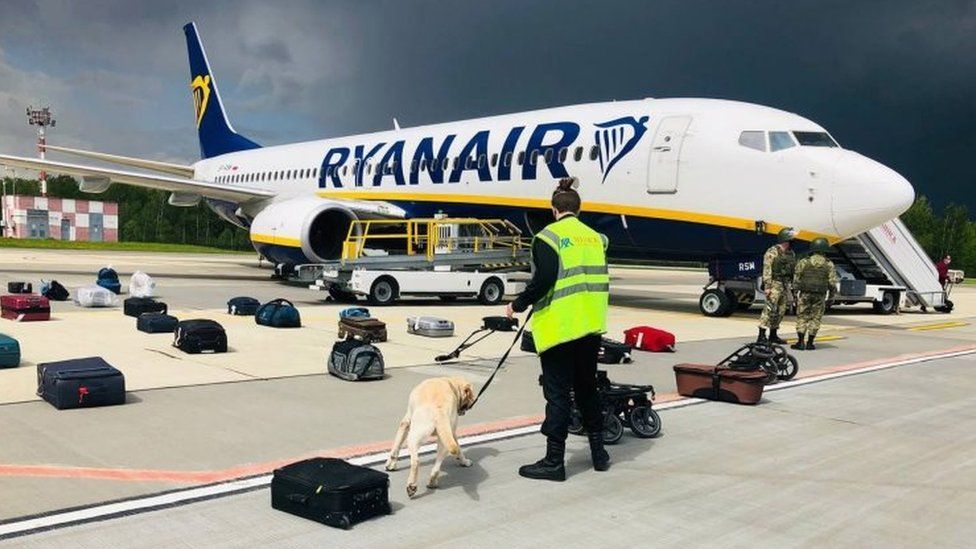 Meanwhile Polish national airline Lot said it had suspended both overflights and flights to and from Minsk, and Ukrainian Foreign Minister Dmytro Kuleba said Ukrainian carriers were banned from flying over or into Belarus.

What happens with a military jet interception?

Why wearing the wrong socks is risky in Belarus

Belavia said it was suspending flights to the UK and France until 30 October.

Belarus, though not in the EU, borders three EU countries. Many flights to and from Asia as well as within Europe use its airspace.

Earlier on Tuesday, European Council President Charles Michel shared a map of air traffic taken from the flight tracking website Flightradar24 in which there appeared to be no planes in Belarusian airspace. Some flights, however, have continued throughout the day