Tell me how Many more Petals should Fall 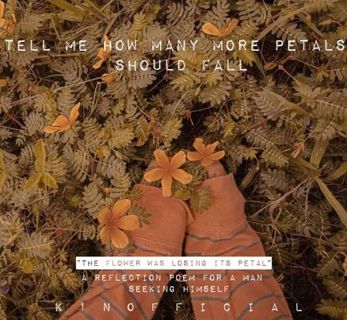 Tell me how Many more Petals should Fall

"A reflection poem for a man seeking himself."

Bees have found their pond of nectar at the greenery of Mr. Alfred's patio
Wings flapping controllably until their roving eyes saw some perfect view
Proboscis sucking each flower's nectar they grow liking
That has long been bloomed by the morning dews

These beauties roamed the day like some pebbles found strayed in the rivers
Some were round; some weren't; some hid quarts and gems; some don't
Some were clothed with algae; some barely have colors
Bees were like shapeless pebbles but all play vital roles and beauty

Swarm of bees danced the day like each one of them was a mountain dressed in heavy fogs and clouds
However, one bee was lost in its reverie and fell away from the rest
She hasn't had any thought she was perhaps lost
For above the rocks, so unlikely from where her eyes should be fixed, a flower whispered her "hello"

The smell was intoxicating the lost bee
She flew and flew; having herself distanced from the swamp even more
But she was not lost in her dedication to get in touch with the lonely flower

She got closer and what she witnessed broke her heart

The flower was losing its petal

"You aren't a dandelion, but why are your petals leaving your embrace?"

She did not whisper those words however she sang them

November air was not still that day; her words were delivered throughout the woods

"Nobody considered me a flower"

Oh, the beauty could speak, really

"They treated me just a vessel of many petals"

"But are you not a flower, really? What different are you from a flower and a vessel?"

The bee was asking a lot

"I am home of many petals; but each time creatures fell gaze on me, they take each petal that I have away"

"Oh, that is sad, but I will not be taking your last petal", she said back, wings flapping

"There is no different, with petals or none, the next few hours I will be gone"

The bee was saddened with what she just heard, "Then I will help you live again"

Until she fell asleep

And the petal was gone

So was the flower, it died instantly as its last petal flew from her hugs

Air was still and heavy

The bee was on top of a rocky mountain

She realized, she got lost from her own swamp in her dedication to chase the fragrance of a flower; that was now gone

She was alone now

She did not leave the place

"Then I will help you live again"

She remembered her words for the departed flower

She took notice of the flower's head

There- swamp of seeds

She flew closer and there she saw

She flew a distance away and, in a go, she stricken head first the flower for the countless of its seeds to fall

One- Four- numerous of them fell on the ground

Many of them gone onto the bed of rocks, striking the flower won't guarantee them seeds to grow

And so, the bee thought carefully, "I will make a bed for them to grow"

Improvising, she did not strike again the head of the flower

She was carefully taking them with her small hands, one-by-one, and put them on a bed of soil she saw nearby

"Hoosh", she was tired

But she was deeply heartened

She finished planting the seeds

Days has passed, the clouds have been changing shapes above

But the little bee did not lose hope

Once upon a time, a cloudy morning was vanished and outside shone the mighty sun

Yes, "The seeds", the seeds are going to be the sons and daughters of her old friend

Her weariness flew away from her, seeing the fruit of her labor and dedication

"Alas! my friend, you will be alive again", she was hopeful

Each sprout will give her the paradise she can retire to

The first fragrance so alike from her late friend touched her nostrils She eyed where it came from; the bed of them once a seed, now was a land of beautiful, alive lilies The bee flew and flew, her body was dancing along her every sniff of the heavenly smell

The bee fell asleep on top of the largest Lily

The flowers were thankful and prideful of their mother, the lone bee

They started chanting and singing, offering their smell to the air of December

And later, a swarm of bees alike to the lone Bee found its way to the field They were rouges They did not have any queen to foster them

Until the lone bee was awaken

On her view were hundreds of bees swarming her sown flowers

But they were not strolling the field

They were giving honor for their newly found queen

The lone bee must have been destined to get away from her own swamp; to become the queen of these

The flowers were celebrating

The bees were joyful

And rule the swamp that just found its home in her

The sparkle in the ambiance on that field was like redamancy

Their dance pollinated the flowers

And the sun was the witness and bearer of the news

Each petal that fell

Everyone of them gave chance for a seed to mature

Until they will fall

No seed is able to reach the land

The once lone bee

The little bee that was believed to be lost forever

Was never have been found by her own swamp, but destiny was not cruel

On top of the rocky mountain, the bee became the firefly that put aflame the dream of her old friend. To be a flower and not just a vessel of petals; to live again and to home many creatures, forevermore.

The Lone Bee who Heartened the Rocky Mountain

Special Thanks to M.J Tandoy's Photography for the Images