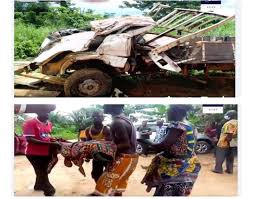 The two JHS friends namely Ansaah and Esther both are 16 years was found dead on the road side lying motionless at Okrakwadwo community junction of koforidua to Adukrom highway. They left home on Monday evening to visit their boyfriends at Mintakrom the nearby community. The were found dead at dawn on the road side some hours after leaving the home. Families of the two deceased JHS girls have called on the police to investigate and arrest those boyfriends.

Esther Oye died after been taking to Tetteh Quarshie Memorial hospital at Akuapem Mampong whiles the other friend was pronounced dead after been taking to the regional hospital. The families of the victims said they will reject if it was cause by road accident but they are truly sure that the death of the deceased may cause by their boyfriends.The spokesperson said that, they saw a text message on Ansaah's phone from her boyfriend that why is she coming to visit him. She would have told him earlier before coming but girl refused and still went out. So the police should do well to arrest those boyfriends.