Could there be a better future for me?

There's hope for everyone as long as you're still breathing, don't kill yourself, read this story and be blessed by it. 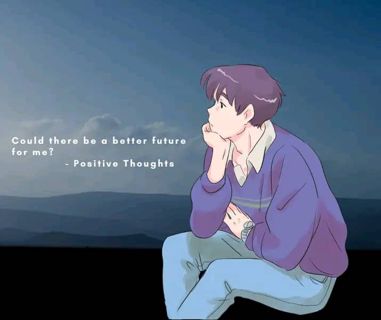 A young boy who was born from a poor family has always tried his best to make his parent proud. After his graduation. He couldn't secure a job.

Life becomes so miserable to him. At first, he felt his parent's efforts towards him is wasted. He looked at his fellow mate who went to school with him having a good well paying job with beautiful house to call their owns.

Most especially those who graduated after him has have their dream homes. But yet his own seems not to be working out. He became depressed and feel like commiting suicide. Life has nothing good to offer him rather than sorrow.

When he get back home, he thought of what to do. Having made up his mind, a voice stroke him, "Pray to God" he turned it down and it repeated itself three times then he prayed unto God over his life.

The next day, he took his CV and was heading to a company. When he get there, after the interview, they turn his proposal down. He was sad and began crying, at a point, he started lamenting into God.

After going to four company and get rejected. He cried unto God for a help then began heading home. As he was going, he saw a thief robbing a car at the middle of the day. He was afraid but a voice tell him to go and rescue the person then he obeyed and ran to the scene.

The thief ran when he saw him but he pursue him and collected all what he stolen from her. She was astonished over his gesture, she asked him how he managed to apprehend the thief and he replied her, "I don't really know how I did it."

After the incident, he was employed by the woman to her company. Unknown to him, the first company he applied for was owned by her. Luckily to him, he was made the manager of the company and this transform his entire life positively.

1. Never be envious over other people's progress, you'll be depressed.

2. No situation in this life that doesn't has an end. In whatever you're going through, there's an end to it.

3. Never kill yourself because of challenges of life, they are just there to inspire and motivate you to keep moving.

4. Don't lament when God ask you to do something. Kindly obey Him, if you don't wants to acknowledge Him, you'll keep on repeating such mistakes.

5. Always be sensitive to listen to God when he speaks even when you are sad moment, God does speak