How Became A Goat 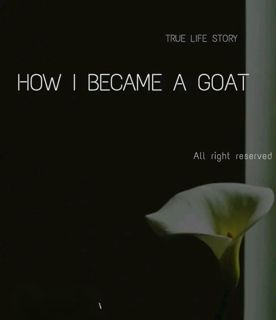 🥺HOW I BECAME A GOAT (A true life story)

My name is Tony, I am a very handsome promising young man who has a lot of aspirations and dreams. I am the only son of my father.

Now here is my story

I lived with my father alone after my mothers death in a small town in the eastern part of Nigeria. Everyone around me loved me because of my intelligent and charisma.

We are not rich, but we don’t starve…yes,But even as we don’t starve which is the most important thing,I was still not happy and contented. I wanted more,I wanted to own a lot of things including good foods;at least better than the normal yams,beans and rice we ate on a daily bases..I wanted varieties. I am the type of guy who like enjoyment,I love good foods and good life.

I forgot to mention,I am a graduate from a reputable university in Nigeria and I made second class upper degree,yet I was jobless.

My father sold one from the only two lands he had just to see me through the university,that was the promise he made to my late mother on her sick bed;he assured her that their only child must be a graduate and a successful man.

My mother died when I was just a teenager, I had no idea life without a mother would be so difficult but I had to adjust,at least for my father.

This added to my frustrations and made me a terrible murmurer, i murmured and hissed like a woman; tufiakwa…

sometimes it annoys me seeing myself display those women traits but I didn’t care to change at all,after all god did not create murmuring for only women…I hated the fact that some of my friends were big boys in town and I was at home eating papa thanks sir,did you remain small?

I always ask God every morning

Like I feel frustrated more in the mornings,I guess my anger doesn’t like morning because I don’t feel so angry at night;I feel happy going to my bed every night but I always wake up with a terrible anger the next day,just like PEAK,anger is in me..

“Life is a misery and it is beyond what you see or think you know” that was my father’s favorite words to me anytime I talk off point as he fondly referred to those my rants.

One morning,I knelt down for the very first time to pray to God as I woke up, I was praying in Queens English and my voice sounded like Celine Dion, chaii..if not for one thing I would have entered studio that day meennn,fine boy with fine voice,I praised myself, but I felt God was not hearing my prayers I then decided to humble myself and prayed in pidgin English ;”God abeg na,abeg abeg ..help me na die I Dey…abeg please biko God,but nothing happened…my prayers were not answered, I was disappointed that my prayers were delaying. I wanted God to answer me immediately even though in my mind I knew I prayed rubbish.

On that Saturday morning, I was lamenting as usual because we were having yam porridge for breakfast,my father woke up early enough just to prepare that meal but instead of appreciating his efforts and strength I condemned the food as always…

I threatened my father that nothing would make me eat that rubbish in the kitchen..my father looked at me in dismay and looked up to heaven,then asked God “where did he get this boy from and sent to him as a son….

I became more angry,the way I get angry eh can be studied in the university as a course.

I can stand for hours hissing and murmuring,since I am jobless I can proudly say murmuring is what I do for a living.Any day I don’t whine,hiss and murmur in the house, my father will think I am dying and he would go to the chemist close to our house to get me some Malaria and Typhoid drugs and force me to take them. In his words,a living dog is better than a dead lion…

My father went ahead to dish his own Yam porridge since I refused to eat..well I didn’t care.

I had this friend that I was so close to,we call each other brother,he was more than a friend to me. We visited each other’s house and do a lot of things together. I always complained to him and he has tried severely to help my situation…on that faithful day he brought some news as usual, and I wish I could turn back the hands of time and not listen to him…but unfortunately, it was too late.

To think that I walked into my doom with my own two legs,I used my own hands to destroy myself…