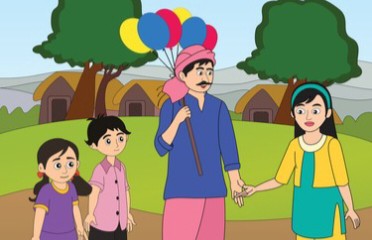 There was a village in which two siblings lived, the sister's name was farwa and the brother's name was Fayaz.

Farwa was very fond of reading but according to the village customs. She was not allowed to do so and in the village a son was highly preferred. Sons were sent to school while daughters were made to do housework.

Similarly Fayyaz was sent to school. And all the work of the house was done from Farwa.

With that said, the game started,

In the first round, no one broke the mango.

When they reached home, they asked his mother to give us this common bite. The mother distinguishing between son and daughter gave the big mango to her son and the small one to her daughter.

The daughter did not say anything to her mother at that time but she was crying in her sleep at night. Farwa had a parrot named Raj. The Raj used to stay with him. When farwa was crying and Raj was wiping her tears and telling her that I am with you.

When both woke up in the morning and saw that Fayyaz was going to school, Farwa started crying and saying that I wish I could go to school too. Then farwa said to Raj, will you follow Fayyaz to his school for me?

Then Raj said to him, why not I am your good friend I will follow Fayyaz and learn what they teach there. Then I will come and teach you. Raj followed Fayyaz to his school and sat on the window. He saw that the teacher was teaching there, then he saw and understood. Then he came home and he came and taught farwa.

And then Raj used to follow Fayyaz every day. He used to go to school every day to learn and come and teach farwa.

One day, Farwa was feeding grain to the chickens. She was playing with the village girls until the chickens were eat. Meanwhile, a thief came from behind and took one of his chickens and ran away from there. farwa felt a slight movement and quickly ran inside. He seemed to have fewer chickens.

Then she calculated according to the method taught by Raj.

Then she realized that he had six chickens while now I have got only five. She hurriedly ran outside and saw a boy running away with her cock and she started shouting loudly. Fearing that all the villagers would not gather, the thief jumped into the canal. The villagers immediately gathered and pulled the thief out of the canal. He took back the chicken from the thief and gave it to Farwa and handed it over to the police. Then the villagers asked Farwa how he knew that one hen was missing.

Then Farwa told the villagers that as you know, I am very fond of reading. When my brother Fayaz went to school, I used to send Raj after him and he would come and learn what was being taught there and then he would come and teach me. That's how I learned it.

And by doing this I realized that I had six chickens, but now I have five.

The villagers were very happy with Farwa and appreciated her a lot. The villagers also praised her parents a lot and said that your daughter is very smart and intelligent. Her parents were delighted with her praise and allowed Farwa to study. She was so happy that day, she thanked so much that Raj because all this was possible because of Raj.