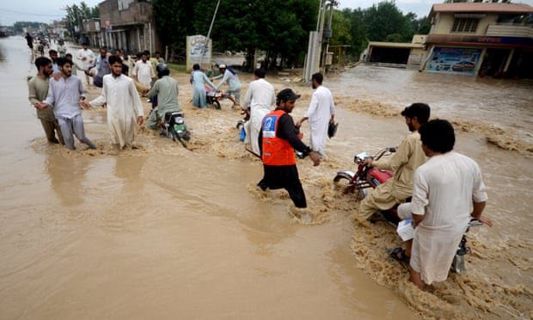 Passings from far and wide flooding in Pakistan have passed 1,000 since mid-June, authorities have said, as a priest called the country's dangerous rainstorm season "a serious environment disaster".

Streak flooding from the weighty downpours has washed away towns and yields as troopers and safeguard laborers have cleared abandoned inhabitants to the security of help camps and gave food to great many uprooted individuals.

Pakistan's National Disaster Management Authority said the loss of life from the storm downpours had reached 1,033, with 119 killed in the past 24 hours. It said the current year's floods were equivalent to those of 2010 - the most terrible on record - when in excess of 2,000 individuals kicked the bucket and almost a fifth of the nation was submerged.

Sherry Rehman, a representative and the nation's top environment official, said in a video posted on Twitter that Pakistan was encountering a "serious environment fiasco, one of the hardest in the ten years".

"We are right now at the ground zero of the forefront of outrageous climate occasions, in a persistent fountain of heatwaves, timberland fires, streak floods, different chilly lake explosions, flood occasions, and presently the beast rainstorm of the ten years is unleashing constant destruction all through the country," she said. The on-camera proclamation was retweeted by the country's representative to the European Union.

The remarkable storm season has impacted in excess of 33 million individuals - one of every seven Pakistanis - across each of the four of the nation's territories. Almost 300,000 homes have been obliterated, various streets delivered obstructed, and power blackouts have been inescapable.