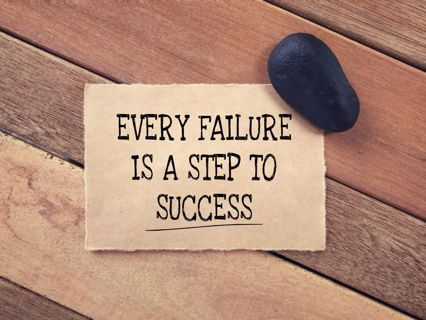 Failure is not the end especially when you know how to accept failure for what it really is. Too often, many people associate failure with giving up relative to whatever they are attempting. While success is celebrated in our world, one's inability to achieve success labels one as a failure. The greatest fallacy, however, is that many, many successful people or organizations have experienced failure well before they achieved success. It is not common sense to assert that those who have achieved success have done so because they are lucky or that they have never failed. In fact, just the opposite is true in that failure has been and still is one of the best teachers in life. Accepting failure isn’t easy. But there are a few things that we can do to ensure that we don’t critique ourselves too hard, and are able to get back up after being knocked down. just part of what you’re doing, part of your process. “Failure is an event, not a person.” Next, failure is just information. Tony Robbins said, “There is no such thing as failure. There are only results.” The results show you what’s working and what needs more attention. Finally, failure is an opportunity. It’s a chance to begin again, with more awareness and information than you had before. That’s an advantage. Be brave and fight with your failures and become a successful person.