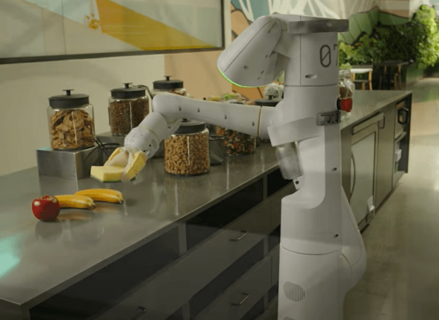 Researchers at Google said large language models made the robots respond better to complex and abstract requests from humans.

Google is working to combine large language models with Alphabet’s Everyday Robots, so they can help humans with a broader range of everyday tasks.

The Everyday Robot has been in development by Alphabet for years now, being introduced to Google offices last year to help clean up around the office.

Researchers at Google said that currently, most robotic systems can only respond to short, specific commands, such as “pick up an apple”. The team believes large language models hold the key to improve these machines.

Large language models are natural language processing (NLP) systems that are trained on a massive volume of text.

By using large language models such as OpenAI’s GPT-3 and Google Research’s PaLM, it is possible to have the robot interpret the right response to more general commands, or react to a situation properly.

For example, if someone says “I spilled my drink, can you help?”, the robot makes the decision to get a sponge and clean it, rather than needing to be told “pick up a sponge”.

“We thought that combining this advanced language model with a robot that can learn by itself, will allow us to leverage the benefits of each,” said Google research scientist Karol Hausman in a video.

The team behind the system, dubbed PaLM-SayCan, seem happy with the progress so far. From testing 101 tasks in an office kitchen environment, Google said the robot chose the right skills to perform a request 84pc of the time, while executing it successfully 74pc of the time.

“We are still far from this becoming a household staple and there is a long road ahead before we can communicate with robots more naturally.” Hausman said. “However, we are excited to see the possibilities as we continue to explore new approaches to train more human-centered robots.”