A medieval "club ball" game involving an underhand bowl towards a batter. Ball catchers are shown positioning themselves to catch a ball. Detail from the Canticles of Holy Mary, 13th century. 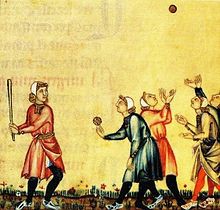 Cricket is one of many games in the "club ball" sphere that basically involve hitting a ball with a hand-held implement; others include baseball (which shares many similarities with cricket, both belonging in the more specific bat-and-ball games category[2]), golf, hockey, tennis, squash, badminton and table tennis.[3] In cricket's case, a key difference is the existence of a solid target structure, the wicket (originally, it is thought, a "wicket gate" through which sheep were herded), that the batter must defend.[4] The cricket historian Harry Altham identified three "groups" of "club ball" games: the "hockey group", in which the ball is driven to and fro between two targets (the goals); the "golf group", in which the ball is driven towards an undefended target (the hole); and the "cricket group", in which "the ball is aimed at a mark (the wicket) and driven away from it".[5]

It is generally believed that cricket originated as a children's game in the south-eastern counties of England, sometime during the medieval period.[4] Although there are claims for prior dates, the earliest definite reference to cricket being played comes from evidence given at a court case in Guildford in January 1597 (Old Style), equating to January 1598 in the modern calendar. The case concerned ownership of a certain plot of land and the court heard the testimony of a 59-year-old coroner, John Derrick, who gave witness that:[6][7][8]