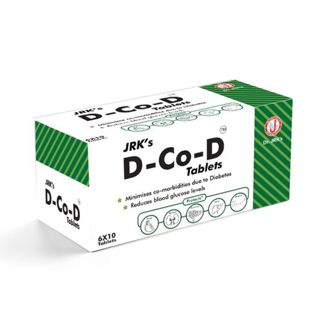 Diabetes is a metabolic disease occurs due to lack of insulin production or due to insulin resistance. Based on the insulin production and resistance there are two types of diabetes – type – 1 insulin dependent and type-2 non-insulin dependent. Even though the condition looks simple it contain various underlying problems which occur over a period of time called co-morbidites. There are various diabetes tablets and parenteral insulin available but still the condition is not controllable and also leads to co-morbidities.

Presenting JRK’s DCOD tablets that are indicated to prevent the co-morbidities due to diabetes, to protect the various organs from damage and also regulates the blood glucose levels.

JRK’s DCOD tablets, comes under the category of diabetes tablets are known to regulate the blood glucose levels. The mechanism by which JRK’s DCOD tablets able to prevent co-morbidities is that it increases the glucose utilization and metabolism.

Generally, many complications in diabetes are due to poor glucose utilization of glucose at cellular level that results in poor cellular functioning which progressively results in damage of cell or dis-functioning of the cells.

Clinical trials on JRK’s DCOD tablets along with anti-diabetes tablets also prove that the co-prescription increases the glucose regulation and also prevents the pseudo hunger.

JRK’s DCOD tablets are proven for its safety at invitro level on various cell lines such as kidney cells, nerve cells, muscle cells, hepatic cells and pancreatic cells. Therefore, one can take confidently with the advice of doctor for longer duration.

JRK’s DCOD tablets usage on regular basis prevents co-morbidities and also regulates the blood glucose and improves the wellbeing of the diabetic patient.