Loving... Even In The Grave 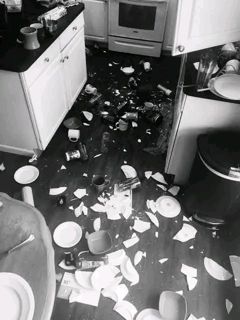 I visited Alina's grave at her father's house.

I went into the house and found a large portrait hanging on the wall.

Alina was tall, fair, and slender, above all, she was very beautiful with dimples.

While I stared at the picture, admiring her smile, her father emerged from the bedroom with a walking stick in his hands.

"She wanted to be a model. She worked on her weight and shape every single day. But I never supported her. I wanted her to be a doctor. A medical doctor just like me."

I turned to him as he continued.

"I wish I allowed her to live her dreams."

He waved and walked to the cushion to sit.

His limbs shook as he walked.

He looked at me.

Cleared his throat and asked.

"Yes sir. No one will go on to chase after a ghost if not for the money. That is the only reason I am doing this."

A big smile appeared on his face.

"You are sincere. All those who have gone there always told me they were doing it because they wanted me to die a happy man. For once I have met someone who wants to do this for the money. What is your name?"

"Alina had a boyfriend whose name was Praises. He looked like you. Just like you. He was an Igbo guy. Tall, and handsome. Not as handsome as I was when I was much younger. But he was handsome. Are you an Igbo guy?"

He heaved a sigh.

"If you can make Alina's spirit rest in peace before the 20th of this month. I will make you a very rich man. Richer than you can imagine."

"I am desperate. I am old. And I have this strong feeling that I will die on my birthday. I need to make sure, my daughter is at peace and has left this world, to the world beyond. I don't know why I have confidence in you. But I believe you can do it for me. And for Alina."

He nodded his head, leaned on the cushion, and closed his eyes.

The road to the haunted house where Alina's spirit was said to live was bushy. It had been abandoned for a long time. No one came close there. Not even a goat or a sheep.

I didn't notice all of this until I was told about Alina's death.

Before I went into my house, I first stopped and stood in front of the gate. I watched from a distance.

Thought about the whole thing again, and said a prayer in my heart.

I was preparing myself for tomorrow.

When I shall be ready to visit.

I walked into my house after standing outside for a while.

And for the first time, I felt real fear.

I couldn't explain how my kitchen had become this way.