AMOTEKUN ARRESTED I68 INVADERS WITH MOTORCYCLES & WEAPONS INSIDE TWO TRAILERS IN ONDO. 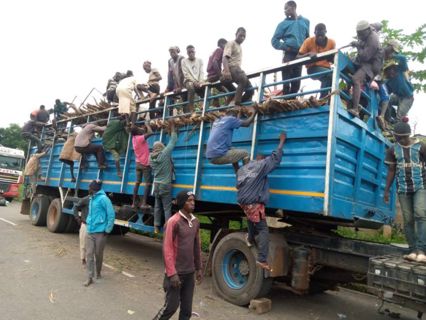 AMOTEKUN ARRESTED, I68 INVADERS WITH MOTORCLES & WEAPONS INSIDE TWO TRAILERS IN ONDO.

Less than four days after men of the Ondo State Amotekun Corps arrested 151 suspected invaders at Iju, Akure North Local Government Area of Ondo State, the Corps has intercepted another set of invaders numbering 168 who are concealed in two trailers.

The 168 invaders were carefully concealed under almost 100 cows and 40 motorcycles to escape from possible check from security operatives.

The Ondo State Commander of Amotekun Corps, Akogun Adetunji Adeleye made the disclosure while addressing journalists over the interception of the invaders in Akure.

Akogun Adeleye who doubles as the Special Adviser to the Ondo State Governor, Arakunrin Oluwarotimi Akeredolu, condemned the movement, describing it as invasion on the South West region.

“On the 7th of August, our stop and search team intercepted these two trailers loaded with cows and they told them that they are on their way to Ondo state, but on careful examinations, we found out that they carefully concealed about 40 motorcycles with over a 100 people lying beneath the motorcycles.

“The upper floor has cows, the middle has motorcycles wrapped and dismantled, while lower floor has over a 100 people lying on each other, such that if you are not careful, you will not observe it.

“I call it invasion, because we can see over a 100 able bodied men who were concealed under animals, we see droppings of cows on their bodies and the motorcycles. For them to be able to stand such horrific situation,

they must be up to some negative motives.

“So, we questioned them on where they were going and why they packed themselves and why they were avoiding the people and they said they were coming to Ondo state, Akure and upon interrogation, all of them do not have any address, nobody invited them and we are becoming curious about this invasion.

“We had just commenced profiling now, but I think we want to tell people of the state to be weary of visitors because nobody knows how many of such had managed to enter the system, but for these ones that we have seen, we saw them with various dangerous charms and other items we are yet to ascertain what their mission is.

“But to those ones who said they own the motorcycles, they confessed that none of the motorbikes had papers. Of course, they photocopied some papers, but you can see one engine number in thirty motorcycles, which clearly showed that they are all forged documents.

“Those who claimed to be the owners, we will find out how they got those motorbikes and also find out their mission in Ondo state and like we said, if they don’t have any credible thing to do and we don’t find anything incriminating on them, we will send them back.

“To those that are suspected to have stolen these motorcycles, we take them to court”, he said.

According to him, the major reason why we are stopping them is that we suspect that they could be used as elements of insecurity in the region and that is why we feel that if you don’t have means of identification and you don’t have a mission, maybe holiday or business and you can’t justify it, then you have no business on the road in Ondo state or South West generally.

“We believe they have sinister motives because ordinarily, these vehicles would have passed so many road blocks and so many security men would have seen them and they will believe that they are just carrying cows, other ones are just carrying beans and rice, whereas, human beings are carefully tucked and concealed inside the trucks.

“If you see the way these ones are concealed, you won’t believe any human being could survive it, which is an indication that they have some negative motives and that’s why we are calling the public to be weary of these kind of people that are moving enmasse into the South West of the country”, he said.

He added that the leadership of Miyetti Allah have also debunked that they are unaware of their movements into the state.

“This is where the investigation is leading us to, because majority of these invaders are coming from Kano, jigawa and they are just picked along the road, what they told them is just to enter, when we get to where we are going, we will tell you your mission.

“So, to somebody who is not even ready to tell you the truth about where they are coming from and don’t forget as a Nigerian, they have the right to go lawfully to any part of the country, it is the unlawful aspect of what they are doing that we are contesting.

“As a Nigerian, regardless of which geopolitical zone you come from, you can transact business around the whole county but if you now move in a suspicious way, that will amount to criminality like wandering, this is where we put you into consideration.

”Right now, we have a total number of 168 people carefully concealed under the cows and under motorbikes inside the two vehicles.

”They all carry charms, daggers and a number of incriminating things that we are yet to ascertain the true ownership but what they they have told us is that all these 40 motorbikes do not have one single paper.”, he said.

”The boys are very young, they can cause havoc and run back to where they come from, it is very embarrassing. We have Amotekun that has eagle eyes in Ondo state and as long as Ondo state is the gateway to south west, they will be caught.

“Last week, we intercepted some and today again, it is very embarrassing, we’ve been talking to their leaders in Kano and Jigawa and they said they are talking to their people, that only goods should be transported.

“I don’t know how the driver managed to get over 168 people with plenty motorcycles under cows and human beings mixed with cows. The situation in the North has not deteriorated to that level at all.

According to Bello Garba, the chairman, Miyetti Allah, Ondo state, he said ‘I don’t know these people and they don’t know me too, I didn’t bring them.