The Sins of STD 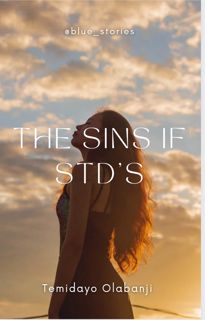 The Sins of STD

My mother-in-law kept tying her laced wrapper over and over (she could have tied it for about hundred times now) she shaked her body, clapping in rhythm to her body’s movement.

“Tell her to take her imbecile child, that child is not your own, is this not enough reason to leave her now? After ten years of waiting” My mother in law said to my husband, (she always hated me, she said I was too much of a light skinned, I was too skinny, she just found fault in me, she even said I looked like a letter I).

My baby started crying running to him to carry him, I could hear her insult and I knew there was nothing I could do again, I’ve lost my husband even the charms of my ancestors can’t stop Adam from leaving me.

“Syphilis” I, and Adam shouted following what the doctor said.

“Chidinma you’ve been cheating?” he questioned me, like he has not been cheating with his secretary, I couldn’t say a thing, I didn’t cheat.

“Not only by cheating, maybe unsafe blood transfers or unsafe needles” The doctor said. Adam stood up banging the table angrily staring hard at me with anger, he walked out of the office.

“He wouldn’t let me come to the hospital he said it was a taboo in his tradition” I said holding myself to cry, I am finally finished.

“I had syphilis myself, though mine was caused by myself, I was stupid then maybe if I listened to the words of the scriptures, I would have not gotten it, it was so sure you were ignorant, because money isn’t a problem for you” he said sipping the coffee on his table.

“Let me ask you a few question, Mrs Chidinma. Did you notice sores on your genitals or tongues or rectum?”

“I had sores on my tongue, it’s started a long time ago can’t recall when, I’ve never had a day of really good health for a long time but I thought the herbs worked” I said back to him.

“Herbs work but not when you have serious diseases, How did you get pregnant for your son” he asked again.

“An egg was kept inside of me, I never have any interaction with my husband asides from talking”

The words from the doctor

“syphilis is a bacterial STD and that is why it isn’t so deadly like HIV not like it isn’t deadly.

The four stages of syphilis

1. Primary stage: The sores felt are really painless, The victim won’t know what is wrong with them, they just find sores on their genitals sometimes the tongue or rectum even their lips, a chancre occurs in a part of the body and heals itself, this stage Is really calm, doesn’t like troubles

2. Secondary stage: A rash that they probably thought was a skin reaction would appear for 2-8 weeks immediately the chancre develops and leave. (A chancre is a skin laison, Incase you’re stuck, I hope you’re attentive you can save a life). Then after about some months it heals on an average of two months. Syphilis can get gentle but it’s really not. (Awareness is key even if you just have a little bump on you or maybe a relative or a friend just walk to the hospital). Within this period They lose weight, they feel weak, partial hair loss and the likes

3. Latent stage: To pass through latent stage and not know, meant the person was extra ignorant, at this stage the secondary stage relapses, if someone should pass through this stage, you can’t transfer it through sexual contact anymore

“And that is why your son has congenital syphilis but don’t get scared, there is a cure for you, though it might be very hard to bring your son to normal and having syphilis doesn’t stop him from being a fighter, he is a fighter and most kids don’t survive it, but I’m ready to help you, if you’re ready to help yourself, it’s all begins with you” the doctor said smiling, I smiled back, I felt a weight drop down, I felt the burden jump out of my soul.

“I wasn’t going to stay again, I’m starting a new life out of bondage” I said back to him and my mother-in-law, who isn’t anymore.