13 ASIWAJUS chosen by the gods, must unite and fight to reclaim Africa's lost history 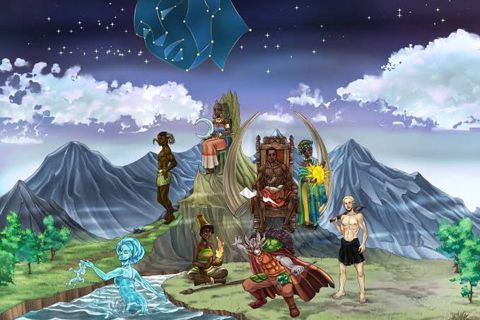 From a time lost in history, a time when gods walked the earth, a time before the fall of the first human civilization.

The elder god OBATALA, he who was granted the power creation by The Supreme One, decides to create an intelligent life form that would one day populate the earth.

Our story begins in a time at the peak of the first human civilization, when the unity among the elder gods is broken.Factions were made and wars waged on every front.  Millions perished and the land poisoned from the very stench of death, for these wars would bring an end to the age of the gods and the fall of a civilization

(The air in the hall is a tensed one, all elder gods belonging to Obatala's faction are sitted around a table and it can be seen from their expressions that they await someone or something.)

(The door to the great hall opens and SHANGO walks in)

SHANGO:(bows & in a loud voice) shango pays his respect to the great white and the elder gods.

OBATALA:(stands and moves slight to

the seat's back with his hands placed on the seats head) Enough of that, tell us what you found out.

(shango stands up and bows slightly)

SHANGO: our spies have confirmed that the floating fortress of death approaches.It will be at the PLAINS OF SAHARA in 3days.

BI: So he finally came(hits both hands of the the table)

TANO AKORA: Hmm(chuckles). I never doubted the fact he would come, he is the the god of death after all.(folds arms).

ALA: How's the evacuations going?

SHANGO: every city & village in the sahara have been told to evacuate. They were all instructed to flee south.

TANO AKORA: and what's the status on the frontlines?

SHANGO: Reports coming in say IKENGA and OGUN are leading their battalions  personally to hold off the hordes of undead.They have set up defensive perimeters and have the advantage.

MINDIS:(stands up and looks at the other elder gods)My fellow gods, the fortress of death can not be allowed to make it past the plains of Sahara (looks down at the map on the table, sighs and looks up)we have to make our stand.

(OBATALA now moving toward the balcony of the great hall, he seems completely absent minded and unaware of the discussion going on in the great hall. He reaches the end of the balcony, looking towards the city and engrossed in his thoughts)

OBATALA: It feels so empty(he signs & places both hands on the balcony)

(ALA approach OBATALA and touches him on his shoulder)

ALA: what is bothering you?

OBATALA: it feels like only yesterday I created the first two humans(looks up to the sky), curious creatures they are(he smiles). Athough with our help, they have come along way.The tenacity they've shown in the face of adversity is something we gods can learn from. It's a shame to watch it all falling to ruin.

ALA:(she takes hold of both his had and looks straight at him) you can't say that, you can't lose hope. A lot of people look to you for strength and support, gods and humans alike.

OBATALA: (still with a solemn expression) Tell me this ALA, if we do win this war against OGBUNABALI's faction. What would the state of the earth, humans or this civilization we have built?(he releases ALA's hold on his hands, turns and looks towards the city with both hands crossed at his back)

ALA: Civilizations can be built again, like you said the humans show great tenacity. We did it once, we can do it again.

SHANGO: Great White, the Elder god ANASI has arrived and requests an audience

(shango bows and leaves the hall)

(TANO AKORA, MINDIS & BI leave their seats and approach the balcony where OBATALA & ALA stood)

TANO AKORA: Why is that traitor god requesting an audience with you?

OBATALA: Do not call him that!!!!(he rebukes in anger)

TANO AKORA:hmm(scoffs and folds his arms)

(the doors of the great hall opens, the elder god ANASI led by SHANGO walk through and are headed for the balcony. AMADOHIA that was still seated, now stands and head out to the balcony).

OBATALA:(with a smile on his face) I remember telling you not to call me that. I'll be forced to call you the messenger.(he chuckles)

ANASI: hahah(he laughs) it's been forever since someone called me that

TANO AKORA: maybe if you were around more, you would know what people call you

ANASI: hahahaha, i see you have changed oh God of war(he chuckles as he looks at TANO AKORA)

TANO AKORA: (places his left hand on his sword) do you wish to see how much I have changed?

ANASI: hahaha, no need to get hostile at TANO, what kind of god of war would he be if the doesn't try to battle everyone. I will say my peace and then leave.

ANASI: I did as you asked OBATALA, I tried reaching out to The Supreme One.

OBATALA: and?(anticipation seen on his face)

ANASI: same as always(solemn expression).The Supreme One remains ever silent.

AMADOHIA: That is no suprise, no one has seen or heard from The Supreme One since the big bang.(looks at OBATALA with a curious expression).What made you think he'll respond this time?

OBATALA: (he sighs) I wished to try one more time before we go to an all out war with our fellow gods

MINDIS:(looks at OBATALA with a vexed expression) you still consider them your fellow elder gods?(voice raised) Have you forgotten the sight of what they done? The millions that have perished, have you forgotten OBATALA???

OBATALA:(with his head slightly down) I haven't forgotten, how could I? (he raised his head, looks to the sky and looks back at MINDIS). Humans are my creation, it pains me to see how much suffering they've been put through.

TANO AKORA: then why do you still hesitate to fight for them?

OBATALA: (he sigh and keeps silent)

BI: he is worried what would happen to the earth and humans if we go all out in this war.

(There is a silence for a moment)

ANASI: I see you all have a decision to make, as I said what I came to say, I shall take my leave.

OBATALA: (he nods slightly)Thank you

(ANASI turns and leaves the balcony)

(OBATALA leaves the balcony, walks towards the table at the center of the hall, other elder gods follow his lead)

OBATALA:(places his hands on the table & looks at the other gods) I guess we have no choice, it's going to be all out war. Shango

OBATALA: work with TANO AKORA, come up with a strategy for the battle.

SHANGO: (bows) I will follow the great white command.

OBATALA: I will ask that the rest elder gods make preparations and be at plains of Sahara in 2days.

(all elder gods begin to leave the hall, heading to their territories in preparation of the coming battl