The martyrdom of Hazrat Abulfadhl (as) narrated by semi

well-known narration of the event, which is widely related to by the people, is that Imam Hussain (as) sent Hazrat Abulfadhl to fetch water. However, what I have read in authentic versions of the narration—like those of “Irshad” by Mufid and “Lohoof” by Ibn Tawous—is slightly different from the common narration, probably highlighting the significance of the event. In these authentic books it has been narrated that in the last moments, rather in the last hour, while thirst had compelled the little children so much--little girls and others in the camps--that Imam Hussain (as) and Abulfadhl (as) took it upon themselves and left together to fetch water. Hazrat Abulfadhl did not go alone, in other words; Imam Hussain (as) accompanied Abulfadhl towards the Euphrates River—a branch of the Euphrates which flowed through that region—in hopes of obtaining water for the camp site. courageous and strong brothers fought while backing each other on the battle field. Imam Hussain (as) was about sixt 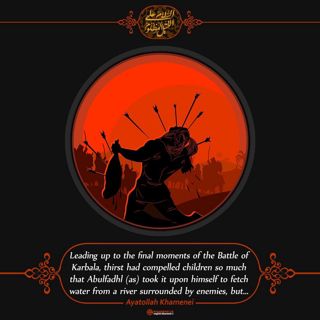 Hazrat Abulfadhl Al-Abbas's loyalty was most clearly manifested when he went to the Euphrates River but abstained from drinking water .