Read about The list of Telugu Movies in August With HYD7AM.com 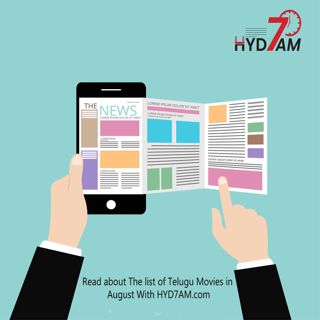 Tollywood News: Fond of Telugu or South Indian movies? Then there is the list of five movies which is scheduled to be released in the month of August 2022. Check out the list Telugu Cinemas releasing this month.

Bimbisara- this is an upcoming Indian Telugu movie, a fantasy action movie which is written and directed by debutant Vashist. The film is based on the Ancient king of Bimbisara of the Trigartala Empire lands in the modern-day world through time travel. It starred the characters Nandamuri Kalyan Ram as the ancient king Bimbisara with Samyuktha Menon, Catherine Tresa, Vennela Kishore, Srinivas Reddy, Brahmaji, Prakash Raj, Ayyappa Sharma, and Warina Hussain. The film shooting was started during the pandemic (2020) and completed in 2021 but due to the second wave of covid, it got delayed. So now it is scheduled to be released on 5th August 2022.

Sita Ramam- this is also an upcoming movie in Telugu Cinema, a romantic film which is written and directed by Hanu Raghavapudi. The film starred the characters Dulquer Salmaan, Mrunali Thakur, Rashmika Mandanna, Bhumika Chawla, Sumanth, Gautham Vasudev Menon, Prakash Raj, Tharun Bhascker, Murali Sharma, vennela Kishore, Jisshu Sengupta, Sachin Khadekar, Shatru. The movie is based on an epic love story that revolves around Dulquer Salmaan, Rashmika Mandanna, and Mrunal Thakur. The movie is all set to release in cinemas now. The film is scheduled to be launched on 5th August 2022.

Yashoda- this is an upcoming science fiction Telugu film that is written and directed by the due Hari- Harish. The movie starred Samantha Ruth Prabhu, Varalaxmi Sarath Kumar, Unni Mukundan, Murli Sharma, Sampath Raj, and Rao Ramesh. The film looks like a survival thriller about a trapped woman, the role is played by Samantha. The trailer of the movie has been released a month ago. The movie is scheduled to be released on 12th August 2022.

Liger- Liger movie an upcoming Indian Telugu sports film which is written and directed by Puri Jagannadh. The movie is based on a story of a slum boy who is born and raised in Mumbai, and become a world champion in Kickboxing. The film starred Vijay Deverakonda, Ananya Panday, Ramya Krishnan, Ronit Roy, and Mike Tyson. The film is all set to be released in cinemas on 25th August 2022.

Latti- this is an Indian Telugu movie which is based on a unique story meanwhile Vishal will portray S Murugathan, a fearsome police officer. According to the director, the plot of this film would be unique and different from previous ones and starred Vishal Krishna and Sunainaa. The movie is going to be released in theatres on 12th August 2022. The movie will be released in five languages, Telugu, Tamil, Malayalam, Kannada, and Hindi across the country.