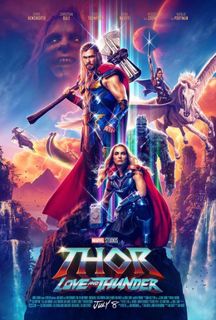 Thor: Love and Thunder is a 2022 American superhero film based on Marvel Comics featuring the character Thor, produced by Marvel Studios and distributed by Walt Disney Studios Motion Pictures. It is the sequel to Thor: Ragnarok (2017) and the 29th film in the Marvel Cinematic Universe (MCU). The film is directed by Taika Waititi, who co-wrote the script with Jennifer Kaytin Robinson, and stars Chris Hemsworth as Thor alongside Christian Bale, Tessa Thompson, Jaimie Alexander, Waititi, Russell Crowe, and Natalie Portman. In the film, Thor attempts to find inner peace, but must return to action and recruit Valkyrie (Thompson), Korg (Waititi), and Jane Foster (Portman)—who is now the Mighty Thor—to stop Gorr the God Butcher (Bale) from eliminating all gods.

Hemsworth and Waititi had discussed plans for a sequel to Ragnarok by January 2018. Love and Thunder was announced in July 2019, with Hemsworth, Waititi, and Thompson all set to return, as well as Portman who did not appear in Ragnarok. Waititi wanted to differentiate Love and Thunder from Ragnarok, seeking to make a romance film and 1980s-inspired adventure. He adapted elements from Jason Aaron's run on the Mighty Thor comic book, which sees Foster take on the mantle and powers of Thor whilst under treatment for cancer. Robinson joined to contribute to the script in February 2020, and further casting was revealed later that year including the appearance of the Guardians of the Galaxy. Production was expected to begin in late 2020 but was delayed by the COVID-19 pandemic. Filming ultimately began in January 2021 in Sydney, Australia, and concluded at the beginning of June.

Thor: Love and Thunder premiered at the El Capitan Theatre in Hollywood on June 23, 2022, and was released in the United States on July 8, as part of Phase Four of the MCU. The film earned praise for its light-hearted nature and the cast's performances, particularly those of Bale and Portman, while criticism was aimed at the screenplay and tonal inconsistency, with several critics deeming the film inferior to its predecessor. Love and Thunder has grossed over $511 million worldwide, becoming the seventh-highest-grossing film of 2022.