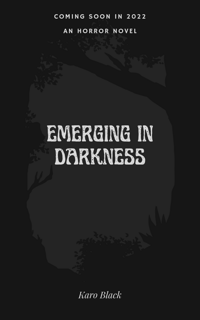 "You are a mistake." The words kept ringing in Maria's head over and over as she walked dejectedly down her deserted street, heading into the woods.

She was oblivious to the gold splashing across the sky as the sun began to slowly settle for the night. She was also ignorant of the beauty of nature around her. Her mind was occupied by the anger and darkness in her heart.

Maria fisted her hands into her jean pockets, after pulling her black hoodie up. Her heart beat faster as her thoughts turned darker.

She did not want to be a victim anymore. She hated being the victim. A source of entertainment for the people around her. She was tired of being laughed at, of being cheated on, and of being hated.

It was true that she was ugly. Her nose was too long. Her eyes were too small. She walked with a limp because one of her legs was shorter than the other. She also had unattractive and mousey hair that could not be tamed. But that gave no one the right to treat her like she was less than human.

Her mother's favorite words were "you are a mistake. A sorry excuse for a human. I can't even look at you. I should have gotten rid of you".

Maria's fingernails bite into her palms, her hands shaking with barely controlled anger. Just as the sun finally went down and the nocturnal creatures came out to play, Maria got to her special spot. It was situated deep in the woods. It was a place she frequented when she sought to hide from her world.

She sat on a big boulder and brought out the blade she always kept in her pocket. Slowly, she drew the blade over the back of her palms, looking at her blood in wonder. "Beautiful" she whispered, ignoring the pain. After all, she was used to pain. This had always been a place for her to do what she wanted, which included spilling her blood.

She reasoned that if a person wanted to get used to poison, the person would have to feed herself with a little dose of poison until her systems become immune to said poison.

She had always known pain. Inflicting pain on herself and getting used to it would make her immune to the pains others inflict on her.

She had always been an island. Nobody wanted to be close to her. People had always said she stank like a wet skunk, even though she always bathed in two different colognes before she left the house.

Her body still bore scars from her last 'accident'. Mara growls deeply. "No more." She said,

She would no longer be the victim. Right there and then, she vowed to herself to make them all pay.

Again, she swiped the blade deeply through her skin as she vowed over and over to make them pay.

She smiled at the blood that flowed down her hand, soaking the earth beneath her. As she did that, she did not notice the mysterious mini whirlwind that appeared behind her. Neither did she notice the dark and hunched figure with hooves for feet, that appeared after the wind died down. Its stomach protruded, and its eyes were all dark.

The demon grinned, exposing sharp teeth, and sniffed the air. It had been attracted by the things demons loved. The blood spilled over and over in the same spot, hatred, and anger. It had found a vessel. A willing vessel.

Still oblivious to the presence of the otherworldly being, Maria brought her hand to her lips and tasted her blood. She wondered how sweet her revenge would taste. She had no doubt whatsoever that it would be amazing.

For a long time, she had been hurt over and over. But now, she was prepared to strike back.

Maria felt her heart getting darker. She did not understand how her heart could be any darker than it was. But there it was. It should have made her worried, but it didn't.

Her lips spread into a dark grin as she swiped the blade across her skin again. Cutting longer and deeper. This time, as she watched the blood, she did not feel any pain. Good thing she brought a piece of cloth to wrap the deepest cuts and clean her blood.

Her grin turned into a dark chuckle of glee as she imagined their faces when they realized the prey had become the predator.

She sighed in bliss as she imagined their screams of pain. She would ensure she prolonged their torture. After all, they have all hurt her for so long. They will not enjoy the bliss of sudden death. They would scream and cry and beg for forgiveness and she would not give it to them.

No one, not even one of them will survive her. She would be their worst nightmare.

She had spent nights on end sleeping in her tears, shivering in fear of what came next.

Their handiwork had birthed darkness.

She cleaned up her injuries and wrapped the deeper ones. Afterward, she stood and began her walk back home, whistling. Her eyes looked different, her gait more confident, and her face was lit up with an expression of dark joy.

Behind her, the demon was no longer there. It had found a home.

As she continued her walk, she did not notice the creatures darting from her presence as if they could sense the evil within. Neither did she notice the unnatural quietness that had settled in the woods. Even the predators that dwelled in the woods were keeping their distance.

The young and dejected girl who entered the woods less than an hour ago was not the one who came back out.

Her mind screamed one word over and over as she skipped down the path. One word that had given her a new purpose in life. And had brought light into her dark life. She sought and would get it no matter the cost. In the world, she would get her revenge.