ORGANS OF THE human BODY

What are the organs of the body? Medically reviewed by Stacy Sampson, D.O. — Written by Zawn Villines on May 22, 2020 Organs and their functions Vital organs Non-vital organs Organ systems Summary In the human body, there are five vital organs that people need to stay alive. These are also a number of other organs that work together with these vital organs to ensure that the body is functioning well. Keep reading to learn more about the organs of the body, the various organ systems, and some guidelines on how to maintain optimum health. Organs of the body and their functions The interactive body map below shows the organs of the body and which systems they play a role in. Click on the map to learn more. Vital organs The vital organs are those that a person needs to survive. A problem with any of these organs can quickly become life threatening. It is not possible to live without these organs. That said, in the case of the paired kidneys and lungs, a person can live w 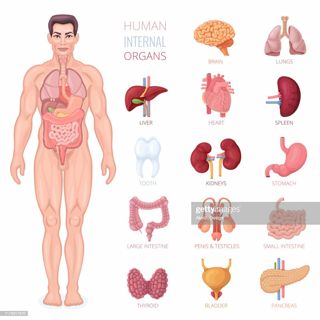 ORGANS OF THE human BODY

Keep reading to learn more about the organs of the body, the various organ systems, and some guidelines on how to maintain optimum health.

Organs of the body and their functions

The interactive body map below shows the organs of the body and which systems they play a role in.
Vital organs

The vital organs are those that a person needs to survive. A problem with any of these organs can quickly become life threatening.

The sections below will look at the five vital organs in more detail.

The brain is the body’s control center. It forms the core of the central nervous system by creating, sending, and processing nerve impulses, thoughts, emotions, physical sensations, and more.

The skull encloses the brain, protecting it from injury.

Neurologists are doctors who study the nervous system. Over time, they have identified numerous parts of the brain, including systems within the brain that function similarly to independent organs.

The brain is made up of three main subparts: the cerebrum, the cerebellum, and the brainstem. Within these areas, there are several key components of the brain that, together with the spinal cord, comprise the central nervous system.

The major areas of the central nervous system include:

The medulla: This is the lowest part of the brainstem. It helps control heart and lung function.

The pons: Located above the medulla in the brainstem, this area helps control eye and facial movement.

The spinal cord: Extended from the base of the brain and down the center of the back, the spinal cord helps with many automatic functions, such as reflexes. It also sends messages to and from the brain.

The parietal lobe: Situated in the middle of the brain, the parietal lobe supports the identification of objects and spatial reasoning. It also plays a role in interpreting pain and touch signals.

The frontal lobe: The frontal lobe, which is located in the front of the head, is the largest section of the brain. It plays a role in many conscious functions, including personality and movement. It also helps the brain interpret smells.

The temporal lobes: Located on either side of the brain, the temporal lobes play a role in numerous functions, including speech, scent recognition, and short-term memory.

The brain’s two halves are called the right and left hemispheres. The corpus callosum connects these two hemispheres.

The heartTrusted Source is the most important organ of the circulatory system, which helps deliver blood to the body. It works with the lungs to add oxygen to blood and pump this freshly oxygenated blood through the blood vessels and around the body.

The heart also has an electrical system within. Electrical impulses within the heart help ensure that it beats with a consistent rhythm and proper rate.

The heart rate increases when the body needs more blood, such as during intense exercise. It decreases during times of rest.

This oxygenated blood travels from the lungs, through pulmonary veins that lead back and join together, to the left atrium, and then through the left ventricle. From there, the heart pumps the blood through an artery that branches to distribute blood to itself and other body parts (except the lungs).

The heart has four valves that ensure that blood flows in the right direction. The heart valves are:

The lungs work with the heart to oxygenate blood. They do this by filtering the air a person breathes, then removing excess carbon dioxide in exchange for oxygen.

Several parts of the lungs help the body take in air, filter it, and then oxygenate the blood. These are:

The left and right bronchi: The trachea splits into these tubes, which extend into the lungs and have branches. These smaller bronchi split into even smaller tubes called bronchioles.

The alveoli: The alveoli are tiny air sacs at the end of the bronchioles. They work like balloons, expanding when a person inhales and contracting when they exhale.

With extensive medical care, a person can live without one lung, but they cannot survive with no lungs.

The diaphragm, which is a thick band of muscle directly under the lungs, helps the lungs expand and contract when a person breathes.

Learn more about the lungs here

The liver is the most important organ of the metabolic system. It helps convert nutrients into usable substances, detoxifies certain substances, and filters blood coming from the digestive tract through a vein before it joins venous blood flow from other parts of the body. Oxygenated blood reaches the liver via an artery.

The majority of liver mass is in the upper right side of the abdomen, just under the rib cage.

The liver plays many roles in digestion and filtering the blood, including:

helping the body filter out toxic substances, including alcohol, drugs, and harmful metabolites

removing some bacteria from the blood

clearing bilirubin from the blood

regulating the process of blood clotting, so that a person does not bleed too much and does not develop dangerous blood clots

The liver partners with the gallbladder to deliver bile to the small intestine. The liver pours bile into the gallbladder, which then stores and later releases the bile when the body needs it to help with digestion.

A person can live without portions of their liver, but the liver itself is vital for life.

The kidneys are a pair of bean shaped organs, and each is about the size of a fist. They are located on either side of the back, protected inside of the lower part of the rib cage. They help filter blood and remove waste from the body.

Blood flows from the renal artery into the kidneys. Each kidney contains about a millionTrusted Source tiny units for filtration known as nephrons. They help filter waste to the urine and then return the filtered blood to the body through the renal vein.

The kidneys also produce urine when they remove waste from the blood. Urine flows out of the kidneys through the ureters, then down to the urinary bladder.

A person can live with just one kidney. When a person is experiencing severe kidney failure, dialysis can filter the blood until they get a kidney transplant or their kidney recovers some function. Some people need to undergo hemodialysis long term.
Non-vital organs

Injuries to non-vital organs may also affect vital organs, such as when a gallstone undermines liver function.

The sections below will outline the body’s non-vital organs in more detail.

Small and pear shaped, the gallbladder sits in the right upper quadrant of the abdomen, just under the liver. It contains cholesterol, bile salts, bile, and bilirubin.

In a healthy person, the liver releases bile into the gallbladder, which the gallbladder stores and then releases to travel down the common bile duct into the small intestine to aid digestion.

However, some people develop gallstones that block the gallbladder or biliary tree, causing intense pain and interfering with digestion. Also, this can sometimes interfere with liver or pancreas function.Pancreas

Located in the upper left portion of the abdomen, the pancreas has two important roles: It functions as both an exocrine gland and an endocrine gland.

As an exocrine gland, the pancreas produces enzymes a person needs to help digest their food and convert it into energy. Those enzymes include amylase, lipase, trypsin, and chymotrypsin.

In its role as an endocrine gland, the pancreas also produces and releases insulin, which helps the body remove glucose from the blood and convert it into energy.

Problems with insulin can lead to a dangerously high level of blood glucose and the onset of diabetes.

The main pancreatic duct connects to the common bile duct, which flows from the liver and gallbladder. Therefore, problems within the biliary tree, liver, or gallbladder may also affect the pancreas.

What are the organs
N
N
Nicky love
Follow