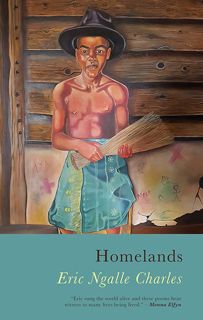 A simmering anxiety underpins Homelands, the quietly arresting debut collection by Eric Ngalle Charles, a Nigerian poet who now resides in Wales. One poem that captures this sense of uneasy displacement is “Zugunruhe,” which takes its title from the German word for “migration restlessness.” The poem opens with the image of a bird, whose “black feathers glitter” as “[s]he smiles despite wounds / on her left ankle.” For Charles, the migratory bird is a metaphor of sorts for all migrants, and its instincts are similar to those of human beings driven to fight or flight by circumstances beyond their control: “Flexing plumes as if with an Au revoir, / a goldfinch stretches, a seasoned boxer.”

German and French words and phrases are interwoven through these poems, reflecting the imperial legacies of Cameroon, a country that, as the poet explains in an endnote, “stands divided today along old colonial lines, between the English and the French spheres of influence,” and where the “average Cameroonian speaks at least four languages.” Charles leaves many terms untranslated in-text, such that the poetic voice retains its authenticity, while copious footnotes render the poems comprehensible to a broader audience. The most enchanting examples occur in poems that draw on stories and figures from Bakweri folklore. These include Mokele Mbembe, often depicted, erroneously, as a surviving dinosaur (“river deity, you alone know / where our dreams have gone, / why we wander”) and Ndondondume, a mythical creature that seduces people to ruin who appears in the chilling poem “When They Came”:

Throughout this collection, Charles wrestles with the complexities of language, geography, and identity, but the central question of this book may be the one raised by the speaker in one poem, who, when asked “where are you from?” can only wonder: “How long must one stay in a place to become it?”