AM JUST A TAX PAYER

Poem based on a true story in Kenya 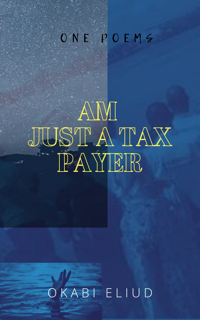 AM JUST A TAX PAYER

I write from the deep waters of the Indian Ocean. It's been over 72 hours now and I am still trapped deep in this salty water, weighing down on my lifeless body, draining every piece and peace that I need to have as I rest from the troubles of the world where I thought I really mattered. But alas!!! I was only a taxpayer... Just that... A USELESS TAX PAYER!!!

It was a warm afternoon in the beautiful coastal town of Likoni. The cool breeze from the vast waters of the Indian Ocean brought the much needed freshness in my small rented apartment.

"We need to leave now..." I told my daughter who required some school items and snacks for the week.

It was end month and I had received my salary, net of TAXES paid to the government. As I looked at my payslip, I couldn't help but notice the increased number of deductions but still, I had to squeeze something out of my TAXED salary for the welfare of my girl. That's what a good parent does, selflessly.

My daughter was always excited about crossing the Indian ocean on the ferry. This was her opportunity to enjoy yet another ride on the ferry.

We hurried out of the apartment and got into my car whose loan I had not finished servicing. Soon, we were at the Likoni channel and judging by the numerous cars waiting to board the ferry, it was an afternoon full of life.

As soon as we were given the greenlight to board the ferry, the car engines roared to life. One by one, they boarded. Mine was the last. Soon, we were off, headed for Mombasa. Before long, we were midway in the channel. Suddenly, all hell broke loose!!!!

I can't recall in detail the chronology of events but my car reversed and plunged onto the waters of the Indian Ocean. We were still fastened on our seats by the seat belts. All the windows were closed. I watched in horror as the ferry moved away, leaving us trapped in the car, floating on the ocean.

Amidst the terror, several thoughts crossed my mind but none materialized... I needed to swim and save my life and that of my daughter. Here I was, in my car, on the ocean with water sipping in slowly but surely. I clung to the hope that the Ferry services would respond swiftly to rescue us, or the coast guard... Any government body in the vicinity, which I paid TAXES to sustain. I was sure we mattered to them and efforts to rescue us would be thorough and swift. I was wrong!!!

I could see people watching us in horror, mouths agape. Some took out their phones to capture the moment and share on their social media platforms. Women shouted and wailed from a distance but that was all they could do: Watching us as my car disappeared into the salty water, with my daughter and I on board.

Soon, it was dark and the level of water in the car was rising. We still hoped that rescue was on the way. With time, it became clear that we were on our own.

I held my daughter's tiny hands as she gasped for air, just before the water covered her... She breathed her last and so did I....

In my lifeless body, I can hear them from a distance speaking to the journalists. Assuring them that all efforts are being made to retrieve our bodies. I am no longer called by name, I am being referred to as "a body".

What if I was a tourist from a foreign country? Or a politician? Or a prominent government official? Would it have taken this long?!!!!

Anyway, I was just A TAX PAYER

BASED ON A TRUE STORY