The below paragraph tells about the past of some 10 sculptures, which you have to find in which country --- at the last of each paragraph one small question is there about that sculptures. Try to find it out and check your knowledge about those sculptures and at last there is an answer key of those questions. 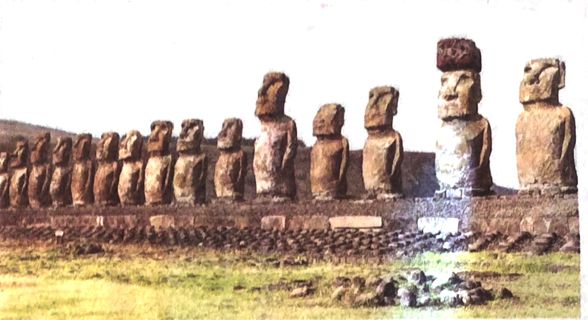 1 This fabulous statue was unveiled in Piazza della Signoria in Florence . Leonardo da Vinci submitted a design but it was rejected in favor of another ar tist's design . The name of the statue Tefers to the subject, who was usually depicted in a victorious stance but in this looks tense and ready for combat. Who was the sculptor and which statue is this that is one of the most recognized works of Renais sance sculpture ?

This is the tallest statue in its country . When it was originally assembled , it was brown because of the natural color of copper . Over time it slowly turned to the iconic green it is known for today. The sculptor actually intended for this statue to be at the Suez Canal and called it ' Egypt bringing light to Asia ' but that didn't happen ; eventually it made its way to the island with which it shares its name . Which iconic statue is this ?

This limestone statue is of a myth ical being which has the face of King Khafre and was probably built in 2465 BCE. The name we refer to it is misleading as that usually refers to a woman with a lion's body that has wings , but this is of a man without wings . It was thought to have been very colorful once. Which statue is this and where is it ?

Many cities use statues to repre branding and tourism . Copenhagen ( Denmark ) and Singapore have un que statues that depict a mythical creature that is half aquatic and half terrestrial . The one in Copenhagen is a tribute to Danish fairy tale auth or Hans Christian Andersen . The one in Singapore refers to the fact that it was initially full of fishermen and to the Sanskrit name of an ani mal that was never present in that country in the wild. What are these two statues ?

This iconic bronze statue was conceived by its sculptor as part of ' The Gates of Hell ' series and shows a nude man sitting on a rock who seems to be in deep thought . In initially it was called ' The Poet ' but soon became popular by another name which led to it being used very often in popular culture to represent philosophy. What is the name of the statue and the sculptor ?

This is actually a Greek statue of 6 Aphrodite . The name we know it by though is the Roman version of the same goddess. The statue's name al so refers to the island where it was found . It was given as a gift to the French and during the process of transferring in 1820 two importantparts of the statue were left out. Which statue is this and what parts does it miss ?

THE 7This statue is the smallest ( by a large margin ) in this list . Alth ough it is just 61 cm tall, it has been a focal point of the city since the 15th century. King Louis XV , once as a peace offering , appointed the statue a Chevalier of the Order of Saint Louis . It is probably the only sta tuette in the world to possess an ac tual wardrobe of clothes . Since 1612 it has been dressed up frequently. Known as Manneken Pis , where is this statue and what does it depict ?

The Moai are human figures carved by the Rapa Nui people out of single pieces of rock on an is land in the Pacific Ocean. Research ers believe the 900 plus massive sta tues were constructed between 1250 and 1500 AD . The popular name we know them by refers also to the is land where they are found . The is land gets its name from a specific day on which a European explorer land ed there. How are the moai called ?

The Motherland Calls is the tal lest statue in Europe and the tal lest statue of a woman in the world . This majestic statue shows a woman stepping forward with a raised sword and calling out to the citizens to fight the enemy and continue their attack . When it was unveiled it was the largest statue in the world at a height of 279 feet . It is supposed to have been based on Nina Dumbadze who was a discus thrower and the sculptor's wife . In which country would you find this beautiful statue ?

Vandhiyathevar was the Chief of two Chola kings . He is the main protagonist of the Tamil novel Ponniyin Selvan . There is a statue of him controlling an animal near Anna flyover on Mount Road in Chennai . This statue was erected in 1974 to mark the end of a colonial hobby which is the only sport on which betting is legally al lowed in India . What hobby was this that was established in Chennai in 1777 , and which animal is portrayed in the statue ?

4. The Little Mermaid , The Merlion.

5. The Thinker by Auguste Rodin.