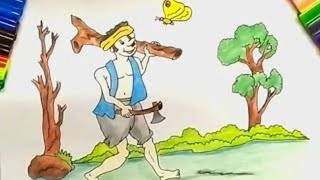 Once upon a time there was a woodcutter in a village. He had a khatara bicycle on which he used to go to work in the city every day. One day he was late for work. It was twelve o'clock in the night. But he dragged his bicycle and passed by a deserted mansion. There was an old berry tree in the mansion. As he passed by, he heard a woman's voice. She was eating a berry sitting on this tree. She called out to the lumberjack, "Listen, lumberjack." At the same time, he threw a berry towards her and said, "Will you eat the berry?" Like a witch or a jinn ghost, etc. He said no, I didn't eat. Saying this, he started running his katara bicycle and didn't even look back. The heart would be taken out because he had heard such stories about this village before. The woodcutter was lucky and he escaped.