The Evil in Man 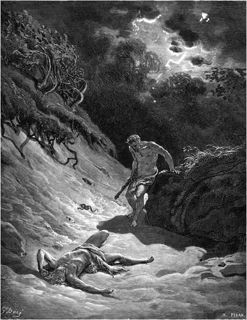 Man is evil. The very statement forces the mind to delve deep into the nature of man and to find out the reasons of his tendency to evilness. Man is capable of unfathomable evilness when we look into the human history through ages.

Evil is inherent in human nature. The origins go to the murder of Abel committed by Cain. From there onwards tales of horror wrecked upon his fellow humans in the form of wars, murder, plunder, destruction and violence start and still go on unabated.

Man is inherently evil. Evil lurks in every human mind somewhere in the dark like a hungry wolf. Human history is full of unfathomable atrocities, cruelties, barbarism, massacre and bloody wars. The world has and is witnessing tales of horror everyday and from the advent of man on the earth. We see torn up and ripped bodies almost everyday around us. Tales of murder, rape, loot, plunder, lust, killings are everywhere both on large and small scales. Man has made this beautiful world a living hell in the race of attaining more and more power over the rest of mankind. This has resulted in extreme barbarism, violence and destruction. Terror wars are going on in almost every major part of the world.

While the battle between the good and the evil rages outside in the world, the battle between the same evil and goodness inside the human mind goes on too. Every human has the Yin and the Yan inside him, the white wolf and the black wolf. If we feed the black wolf lurking around in our minds representing the evil, the bad, the dark in us, we become monstrous, black, barbaric and evil. If we feed the white wolf inside our minds we feed goodness, compassion and kindness. Man must feed the white wolf to make this world a heavenly place which God has created for us with love and compassion and man has the sacred task of making this world even more beautiful and worthy of living for us and the generations that will come.