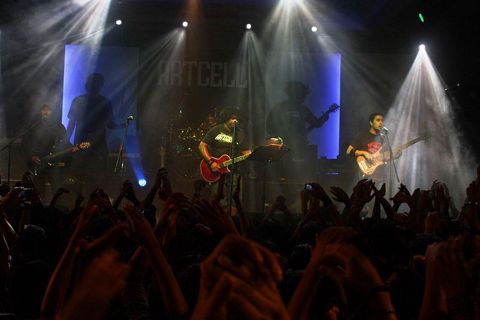 The first song the band composed was ‘অন্য সময় (Other Time) ’. The song set the standard for all the songs yet to come along the way. The first song released by Artcell was ‘Odekha Shorgo’ which was recorded for the great Azam Khan for a mixed album he was planning on. But later it was released on a mixed album called 'Charpotro'. The song ‘Onnoshomoy’ was written by Rumman Ahmed and ‘Odekha Shorgo’ by Rupok. Both Rumman and Rupok were very close friends of the band members; and together they wrote most of the songs for Artcell. During that time songwriter Rupok died from cerebral malaria on 2002.Rupok left when the band was working on their first solo album ‘অন্য সময় (Other Time)’, which was later released in CD's on May 5, 2002 and was dedicated in remembering of Rupok . And after four years of releasing ‘Onno Shomoy’; Artcell came up with their second album 'Oniket Prantor' on 2006 which led them widespread recognition. These are the only two albums the band has released since their establishment. Due to some personal reasons Shaju and Cezanne left Bangladesh 2011 and are settling at Sydney. But despite their absence, Lincoln and Ershad is carrying on with Artcell with guest members.They pronounced Kazi Faisal Ahmed as their permanent lead guitarist on 11 November 2018.[2] On July 26, 2018 after 12 years since their last album the band announced that they were going to release their third album very soon with the original lineup.[3]

According to The Daily Star, Artcell is one of the leading bands of the country.[4] Their song Oniket Prantor is one of the most iconic band songs in the country, it was written for Asmani jannath bithi .[5]