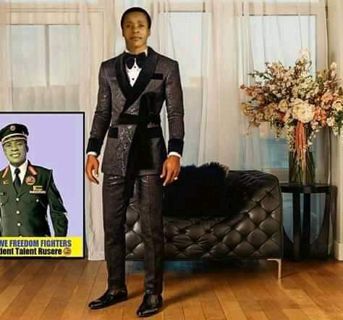 Talent Rusere is a Zimbabwean politician. He was born on the 29th of August 1992 between the hours 8:00am - 11:00am. His mother’s name is Maufe Chidzoyo while his father was the late Herbert Rusere.

Talent was raised from a rural family at Chikombingo village near Chesvingo Primary School in Gutu, Masvingo. Rusere was born after his parents had separated in the early 1992. He was consigned to his grant mother’s care (Rebbita Zirima) at the age of one as her mother had left for a other marriage. Talent grew up as an opharn following his father’s death in 1997. His father died of HiV/AIDS at a very tender age and left him without a sibling.

Talent Rusere holds a master’s degree in political science. He has graduated from several Universities through the Robert Mugabe scholarships. He first graduated his first Diploma in I.T Information and Communication Technology at Eastview Commercial Collage with the (C.I.B.A) Chartered Institute of Business Administration board.In August 2017, Talent graduated his bachelor’s degree in Architecture Technology under the California Board of Architects. In February 2021 Talent Rusere graduated his Master’s Degree in political science under the Oxford University.

He joined the Zimbabwean politics at the age of 19 as an individual human rights advocate. Talent Rusere was one of Robert Mugabe’s closest allies. He worked as Robert Mugabe’s counter intelligence and personal aid for 4 years.

Talent Rusere was the man behind Emerson Mnangagwa’s dismissal as Vice President of Zimbabwe in the early 2017. He flew out of the country in November 2017 following the Robert Mugabe’s military topple.

The young intellect has been a dynamic young politican in struggle for a better Zimbabwe since 2017. Talent is a notable figure in the Zimbabwean politics. He started fighting corruption and human rights abuses by Mnangagwa’s new despensation in 2018.

Talent Rusere is the Founder of (ZFF) Zimbabwe Freedom Fighters Party, which was formed in 2017. In November 2020 Talent joined the Dubai based Zimbabwean politician Edith Chibhamu where he served as the Secretary in the President’s Office and President’s Spokesperson for the Zimbabwe Democratic and Economic Freedom Party.

A few months down the line Rusere left the party after realizing that the Party was a Mnangagwa project designed to silence his voice from fighting for the people of Zimbabwe.

Since 2017 Rusere had become a nomad running for his life from Emerson Mnangagwa. Talent Rusere has so far survived 11 assassin attempts by the Zanu Pf thugs send by Zimbabwe’s President Emerson Mnangagwa. On 2 April 2021 Talent was also forced to leave his Mozambican home 3 years after running out of Zimbabwe as the Edith Chibhamu set-up scandal was exposed by journalists.

Talent is currently under Foreign protection in Capetown, South Africa. Talent Rusere initiated the #NgaapindeHakeMukomana slogan as he joined Nelson Chamisa and the MDC-A in July 2021. Talent is illeged to be Emerson Mnangagwa’s biggest threat in the Zimbabwean political arena.