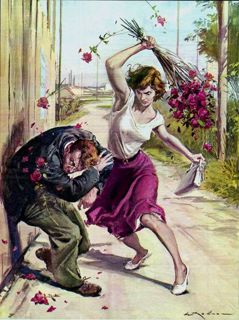 In the countryside of Nottingham, at the central region of England where farmers would gather grains and milk cows for a living, there lived a married couple; Jonny, who was a farmer, and his wife Mary. Now Jonny was a lazy and dimwitted man. He would occasionally go farming with his peers and spend all the money he got on drinking and gambling. Other times he stayed at home, grumbling and nagging at Mary for some food. Mary never complained. She was a local teacher in the town’s primary school and she made enough to buy some food and clothes. They didn’t have children and so life was easy. After a great storm hit the village farm, some farmers were left without a job, Jonny included. But that didn’t worry him one bit. In fact, he thought he was in luck. He loved to sit at home all day drinking or playing with their little beagle.

One day, Jonny and Mary had some friends coming to visit and have lunch and Mary needed some help getting the food ready. Good thing she had Jonny, she thought.

“Jonny dear,” she called, “go to the store and get some nuts for the cake,” she said as she handed him a few cents. Jonny shrugged and grumbled, but he took the money and started of to the store. Then he got a very silly idea. If he bought the wrong item, Mary would have no choice but to stop sending him to the store. So he went to the hardware store instead of the food store.

“Can I have some nuts?” he asked the storekeeper. “My wife is making a cake, quickly.”

The storekeeper handed Jonny some iron nuts in a bag and he took it and strode home, grinning for he thought his mission already accomplished. When he got home, he knocked on the the wooden cottage door and Mary opened it.

“Where are the nuts?” she asked and he handed over the iron nuts. “No silly! Whoever bakes a cake with these nuts?!” He was excited at the look of disappointment on her face.

“Oh dear...I’m so incompetent. Perhaps I should never go to the store again,” he suggested deceitfully.

“If only there were two of me!” she bellowed. “Forget the cake. Go back to the store and get some cream for the chowder. Get it right!”

She handed him another few cents and he took them, grunting...and very determined to get it wrong. Jonny went straight to the cosmetics store instead of the grocery store and bought a shaving cream.

“Now this ought to do the trick!” he thought as he strutted back home. He knocked on the door again and there stood Mary. She stared at his hand in disbelief when he showed her what he had just bought.

“Oh dear...,” Jonny exclaimed with his left hand covering his mouth, “I can’t seem to get it right. I probably shouldn’t go to the store again.”

“If only there were two of me. If only!” screamed Mary. “Forget the cream. Go now and get some flour for the apple pie, quick quick...the guests are almost here. Get it right or don’t come back!”

She banged the door in his face. Jonny fumed. He stomped away, angry and very determined to get it wrong...again! He walked right into the florist’s instead of the bakery store.

“I want some flowers,” he said. The florist handed him a bouquet of roses.

On his was home, he jumped and hopped like a little boy who had just discovered a new toy, smiling from ear to ear as he thought, “Now this ought to do it!”

He bumped into Mary who was on her way to get some cream and nuts. The guests already arrived and there was no chowder or cake or pie.

“Why have you got some flowers?” she asked.

“Mary dear, you asked me to get these for a pie.”

“Silly you, John!” she yelled, “I asked you to get some flour. Whoever bakes a pie with flowers?!”

“Oh dear...I can’t seem to get it right. I really shouldn’t go to the store again.”

“Now whatever do we do with these?!” Mary asked as she forcefully grabbed the bouquet out of his hands.

“Perhaps we can feed them to the goat.” Jonny chipped in, hoping that she would change her mind about lunch.