What the state governor said 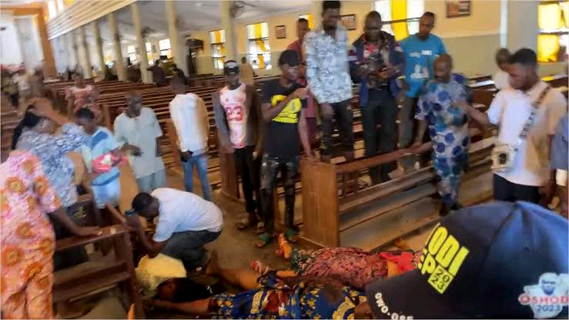 The Ondo State Government has given a new casualty figure from the terrorist attack on worshippers at the St. Francis Catholic Church, Owo, on Sunday.

The state Commissioner for Health, Dr Banji Ajaka, stated this in a statement issued on Wednesday. He said as of Tuesday midnight, the number of victims was 127 while 40 had been confirmed dead.

Ajaka, in the statement, said, “The situation report as at 12 midnight, on Tuesday 7/6/22 at St. Louis Hospital, Owo, 39 people were involved and 13 deaths (confirmed). At the Federal Medical Centre, Owo, a total number of persons involved is 84 and number of corpses in the FMC mortuary is 25; female, 17, and eight males.”

He also said two deaths were recorded from two private hospitals in the state.

Meanwhile, the Ondo State Governor, Mr Rotimi Akeredolu, has assured that the state government will provide land in a good environment for the mass burial of the victims.

Akeredolu gave the assurance while playing host to a team of Catholic Bishops from the South-West led by Archbishop Leke Abegunrin, which was on a condolence visit to the Governor at his residence in Owo.

The governor, who also confirmed the new casualty figure said the new figure followed the harmonisation of the reports from the various hospitals including the private ones. He urged the people to discountenance the figures earlier rolled out.

“What we witnessed in Owo on that Sunday, I have been looking for a word to describe it but I’m not too sure I can find one because it is indescribable. There is no word to describe it. If you say horrific, dastardly, horrendous, all those ones are common words and we use them for many things.

“But I have been looking for a better word to use because we have witnessed barbaric elements, animals in human skin. If you are human, you would not do what they have done. Maybe there are areas where they will do such a thing and they are not worried. But here, we are worried because it is not something we are used to. Human life means a lot to us.

“That is why one is moved. We will have a Memorial Park here where those who died in the attack will be buried. My Bishop sir, we will find a good place as a Memorial Park. It will also be my suggestion that even if there are people who have retrieved their family or members of their family, we must still have a symbolic grave there for them. And it will be there forever, it is not something we can forget and we should never forget it.”

Similarly, the Ohanaeze Ndigbo in Owo Local Government Area said it had begun preparation to take corpses of its members who were killed in last Sunday’s terror to the South-East for burial.

The Chairman of Ohanaeze in the local government, Mr Anayo Okorie, said they have commenced meetings to discuss how to convey the bodies to their various states of the South-East.

He said, “We are here to discuss the way forward for those that died. We cannot give you the actual figures of the Igbos that died because they were many.

“We are planning on how to take the bodies back home. It affected everybody, that is why you see shops are still not open.”

It was gathered that business activities were still paralysed in some parts of the Owo community, especially at the Owa-luwa Street where the church is located.