How much electricity can a solar panelproduce 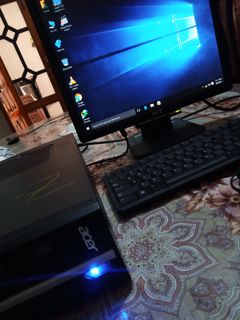 ​RATE OF ELECTRICITY PRODUCED BY THE USE OF SOLAR PANEL The famous personalities who first gave us the idea of solar panels to generate electricity was Charles fritts,Russel Ohl and calvin souther fuller.This device(photovoltaics)is actually a collection of solar or photovoltaic cells which convert sunlight to electricity.The principle of operation of this device is photovoltaic effect.According to the research of a theory humans were aware of this useful product for generating electricity since 7th century.The main nations who contributes a lot in this work are Romans and Greeks.Solar panals actually comprises of two elements via.(silicon and silver).It is essentially an electronic sandwich.The filling is a thin layer of crystalline silicon cells which are insulated and protected from the elements on both sides by sheets of polymer and glass.A solar panel comprises of typically 32 cells can produce 14.72 volts output(each cell producing about 0.46 volt of electricity).The typical solar panel makes 320 watts of electricity in ideal sunny conditions.Solar technology has also emerged for the clean and renewable production of hydrogen as an alternative energy source.When exposed to sunlight a typical home solar panel generates 300 watts in one hour which means that in a normal day during summer,comprising 10 hours of sunlight it can produce about 3000 watts or 3KWh per day.standerdized residential solar panels on the market are coated to generate averagely between 259 and 400 watts per hour.Solar energy provides 100% in exhaust able energy,never pollute the air and reduce the use of fossil fuels.It reduce the need to rely on electricity grid or natural gas.But the solar panels generating that power don't last forever.The industry standard life span of a solar panel is about 25 to 30 years.Indeed solar power is an immense source of directly useable energy and ultimates creates other energy sources i.e biomass, wind,hydro power and wave energy!