THE PHILISTINES OF NIGERIA AND THE DAVID OF OUR TIME. By Exponent Magazine News. 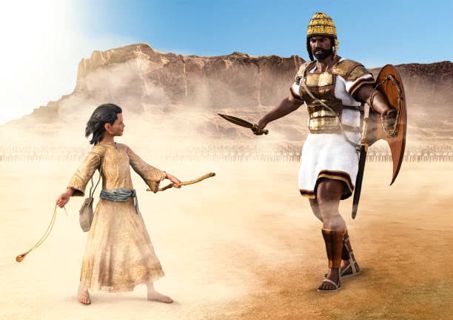 THE PHILISTINES OF NIGERIA AND THE DAVID OF OUR TIME.

Nigeria is a great country among the committee of the nations across the globe. The existence of her glory need to be saved from the hands of her enemies. Against this background, the write up here is trying to examine the philistine of Nigeria and David of our time during this sensitive period of insecurity facing the nation.

However, the term philistine as used here could represent the problems that are drawing the development back in our dear nation while the David of our time could also mean any positive social infrastructural development that can bring advancement to the elevation of the glory of the nation to an enviable stage in the society. It could be done through the initiative developmental project carried out by the government and other representatives that are handling the affairs of the nation for the benefit of the citizens.

To begin with fear which is the major problem facing the commuters that are travelling in our road today. We need to make sure that this problem is solved so that people can have confidence in the safety of our major roads in the country. This kind of monster is causing setback to the development of the transportation industry in our nation. The guru in this sector can be forced to close up if the customers are not patronizing them due to the fear of been kidnapped by the evil people along the road. The implication of this can lead to unemployment in this particular sector and thereby affect the GDP of nation’s economy in the transportation business.

In the area of inflation, I think the problem has cause a lots of injury to our economy rather than solution. Today, the price of commodities are higher than what it used to be in the past. A module of rice which was sold at two to three hundred naira some times in this country is now been sold at seven hundred naira per module. While the foreign one is been sold between one thousand and plus in the market. These are some of the Philistine that are causing retrogressive to the development of the nation and it must be addressed.

In the area of power sector, which is the biggest among all the Philistines that are challenging the glory of this nation from shinning, need to be dealt with. A lot of resources have been sunken into the industry and yet the result is not manifest to what a nation could proud off. Nothing disturb us from having 24/7 electricity in the country with the year this country have attained in time of independence. This is the only sector, if properly handled with all manner of seriousness and sincerity that can solve others Philistine problem bedeviling our nation. I want to believe that those who are saddled with the responsibility will work assiduously in ensuring that the nation is bail out from this mess.

Today, this issue of power failure all the time is one of the reason while unemployment is rising in the country. It is not everybody that are doing the government job or want to engage in such. Some prefer to be working for themselves than be an employee of the government due to one reason or the other. But in a situation where the electricity is not there for them, it is mandatory for those business to fold up. The cost of running a generator for the business of small and medium scale SMS, is very high; so it is important for the government to do the needful since there is no country economy can survive without the input of these small and medium scale businesses.

The word oppression of the nation by the external factor is another Philistine that is causing hullabaloo to the entire nation. The banditry and influx of the live ammunition infiltrated into the society now was not part of our culture before. The weapon baron from other neighbouring country who have lose fortune during the war in the Libya and Sudan are trying to see how they can survive through the selling of their weapons to criminal element in order to cause war and insecurity in the country that are expressing peace so as to advance their evil agenda. This is why we are experiencing crisis in every part of the country today because of this aftermath of the neighbouring countries emergency that have experience war in their own nation.

Similarly, poverty is another great enemy facing the country. To be sincere, the austerity witnessing in the land due to internal factors causing the farmers from advancing in the business of the farming is a great Philistine hampering the living standard of the citizen. No money in everywhere and things are very tight for ordinary Nigerian and to survive the storm of this poverty now require miracle from above the earth in order to calm the menaces.

IMPACT OF THE PHILISTINES TO THE NATION IN THIS CENTURY

Like I discussed in the last paragraph, one of the impact of the Philistines to the nation is to create fear into the life of people in the country so that people will not be able to carry out their business and other legitimate activities required from them by the law of the land.

Lack of peace everywhere particularly where insurgency have taken over their land in the northern part of the country is another impact of the philistines to the nation in this century.

Looking at the insincerity and lie coming out from both sides of the mouth of the politicians during the electioneering campaign as to how they will deliver the dividend of democracy to their people if given opportunity to rule is an area where one should look into. They have failed their constituencies and as such their action could be tied to the impact of the Philistines to their constituency and the nation at large.

Compromise among the civil servants to do illegal deal and falsify age of service are some of the area that have impacted negatively the good governance and service delivery. The case of corruption in the pension industry and in the head of civil service with ex-boss of the organization are still fresh in our memories.

Other impact of the Philistine to the nation in this century is the greatest unemployment in the society. I think government need to carry out census on those who ought to have retired on quarterly basis in order to accommodate those fresh and old graduates in the country into the system so as to solve this problem once and for all.

WHO ARE THE DAVID OF OUR TIME?

In the first instance, it seems the effort of man and weapon have failed us now in this trying time, so it is important for all the religious faith in this nation to revert to their Maker for help in tackling the Philistines of the nation. After Creator then government of the nation like politicians-starting from the president, governors, chairman of the local government and other representatives of various constituencies should teem up in ensuring that the Philistines of the nation are defeated once and for all.

Also, the soldier/military who are saddled with the responsibilities of securing the lives, property and territorial integrity of the nation should ensuring that divide and rule is dealt with in the inner circle of the profession so that they can function effectively as a nation security. Government should ensure that their welfare are been catered for and provide them with the modern equipment they can use to fight the Philistines of the nation to the last score.

In conclusion, the senators and representatives can help in fighting the Philistines of this nation through the provision of dividend of the democracy to the people and ensuring that they engage government in lobbying for the implementation of some durable and viable constituency project that can generate employment purposes to people in the society.