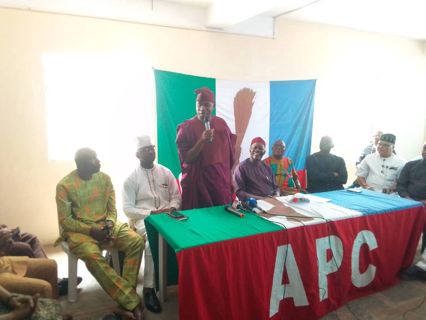 The minister of transportation and former governor of Rivers State, Rotimi Amaechi has blamed perennial insecurity in the country on poverty

He stated this in Akure, Ondo State capital while meeting with the ruling All Progressives Congress, APC StalwartsMr Amaechi said the restiveness would have been minimized if the youths had been positively occupied.

The minister recalled that foreign investors who vacated Rivers State due to insecurity returned when he became the state governorMr Amaechi who promised to get the country out of insecurity also hinted that the railway coming through Akure and the proposed Ondo SeaPort would be completed if allowed to be in power.

Welcoming the Minister, the APC Chairman in Ondo State, Mr Ade Adetimehin described Mr Amaechi as a leader who had youths at heartThe APC Chairman however promised to deliver his message to the party leader, governor Oluwarotimi Akeredolu on the way forward

Mr Adetimehin noted that the minister had always supported governor Akeredolu and the ruling party.